You are here: Home1 / All Articles2 / Keto Course3 / Why I Now Cook with SESAME Oil as Much as Possible (Hidden Benefits)

More specifically, you want help with Why I Now Cook with SESAME Oil as Much as Possible (Hidden Benefits)?

This Post Was All About Why I Now Cook with SESAME Oil as Much as Possible (Hidden Benefits). 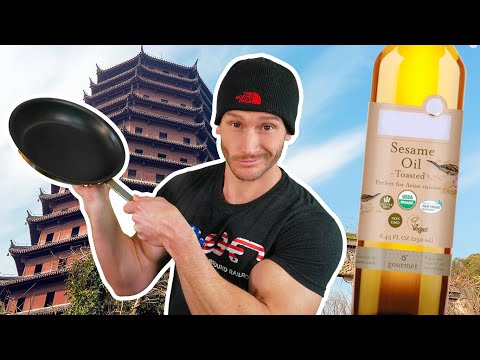 I LOVE SESAME OIL!! I want to share some amazing research I’ve come across surrounding sesame oil, explain why I now LOVE to cook with it! Let’s dive in and I’ll see you in the COMMENTS!!

It’s common knowledge among nutrition nerds that fat sources rich in polyunsaturated fatty acids (PUFAs) are unstable, have low smoke points, are prone to oxidation, and cause inflammation.

The PUFA in sesame are protected by powerful natural antioxidants called (1) sesamin and (2) sesamolin. What’s more, as sesamolin is heated, it is thermally converted into an even more powerful antioxidant called (3) sesamol! This means that, even when you heat sesame oil (or use toasted sesame oil), the fragile PUFAs are protected more so than in other PUFA-rich foods.

The powerful PUFA-protecting effects of sesamin, sesamolin, and sesamol, have been demonstrated repeatedly, including in a paper published in the Journal of Food Science and Technology 2015 (

If the biochemistry isn’t enough for you, that’s fair. Theory is one thing and live biological applications are another. There have been numerous studies proving that sesame oil, sesame extracts, and even tahini also protect against oxidative stress and inflammation in people. For example, a study conducted in fifty osteoarthritis patients, and published in the journal Health Promotion Perspectives 2014 ( found that supplementing with only 40 grams of sesame seeds for 8 weeks lowered the go-to blood marker of oxidative stress (malondialdehyde, MDA) by a remarkable 30% (by comparison the control group exhibited a non-significant increase in MDA) and improved patients’ inflammatory symptoms!

A study published in Life Sciences 2006 ( even found that sesame increases the antioxidant capacity of the brain in mice (this study had to be conducted in mice because looking into the brain requires sacrificing the study subjects).

Sesame is rich in phytosterols, which is like the plant version of cholesterol. Phytosterols block the dietary absorption of cholesterol (as does sesamin, for that matter). In effect, this means sesame should make you excrete excess dietary cholesterol and lower your blood cholesterol. Studies in rodents and in humans demonstrate this is, indeed, the case, including the Heath Promotion Perspectives 2014 study (above), in which LDL cholesterol levels dropped in sesame-supplemented patients by 10%!

Not only does sesamin prevent oxidative stress and inflammation and block excess cholesterol absorption, it also helps burn fat and increase alcohol tolerance! A DNA microarray study performed on rats and published in Bioscience, Biotechnology, and Biochemistry 2005 ( found that sesamin increases the genetic expression of “β-oxidation associated enzymes,” those genes coding for the proteins whose job it is to metabolize fat

Is Pollution Depleting Your Vitamin C?

Should I Do Cardio to Lose Weight?

Benefits of Lactic Acid From Sauerkraut

The Best Foods to Clean Out Your Arteries

5 Unexpected Nootropic Foods That will Light Up Your Brain