You are here: Home1 / All Articles2 / Keto Course3 / Why Does Testosterone Decrease | The Truth About How to Boost Testosterone-...

More specifically, you want help with Why Does Testosterone Decrease | The Truth About How to Boost Testosterone- Thomas DeLauer?

This Post Was All About Why Does Testosterone Decrease | The Truth About How to Boost Testosterone- Thomas DeLauer. 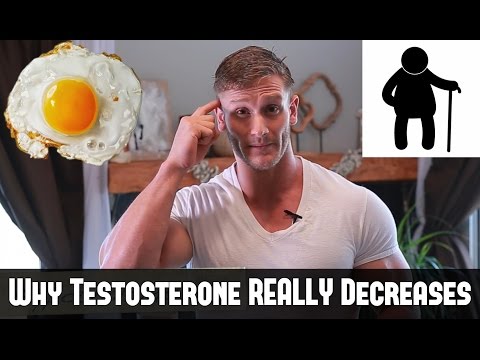 This axis produces circulating steroids important for male sexual function, fertility and development.
Prostate and penis are steroid sensitive organs impacted by the regulation of the HPTA.
This reproductive axis consists of three parts:
1. Hypothalamus
-Produces GnRH (gonadotropin-releasing hormone)
2. Pituitary Gland
-GnRH is sent to the pituitary gland where it stimulates the synthesis and release of gonadotropic hormones LH and FSH.
3. Testis
-Gonads carry LH to the testis where they stimulate testosterone production through the testicular Leydig cells
-Testosterone is produced by conversion of cholesterol
-FSH is crucial for spermatogenesis

As men age, the decrease in testosterone paired with the increase in SHBG leads to a decline in free, or bioavailable, testosterone. These hormonal changes start in the 30s and are well established by the 50s. Levels of testosterone vary greatly between men and not all men will be classified as hypogonadal as they age.

What causes these hormone changes?
1. Testicular failure due to a decline in Leydig cell mass
2. Hypothalamic-pituitary system, or secondary hypogonadism failure
-Believed not to be due to primary hypogonadism (disease of the testes) due to small increase in LH and decrease in responsiveness of LH and FSH to GnRH
3. Change in androgen receptor site sensitivity

One can distinguish between those with pituitary disorders or hypothalamic disease by administering GnRH. Those with pituitary disorders will not respond by producing more LH and FSH whereas those with hypothalamic disorders will respond with increased LH and FSH. Numerous studies have shown a positive impact of healthy, dietary fat intake on testosterone levels in men. Cholesterol is tied to the production of sex hormones. Testosterone is created in the Leydig cells when LH triggers the cells to convert cholesterol into testosterone. Cholesterol is the precursor to pregnenolone, which is the precursor of steroid hormones. Pregnenolone is the precursor of progesterone, which is then converted into testosterone (progesterone is also converted into cortisol and aldosterone.)

3. Cholesterol is the precursor for all steroid hormones

6. An Introduction to Steroids and Negative Feedback Loops
www.jordanhs.portal.rschooltoday.com/page/4498/117/notes/320/1757

8. The Interaction of Testosterone and Cortisol is Associated with Attained Status in Male Executives
f

Always Fast During an Infection

Reversing Atherosclerosis (Hardening of the Arteries) Scroll to top