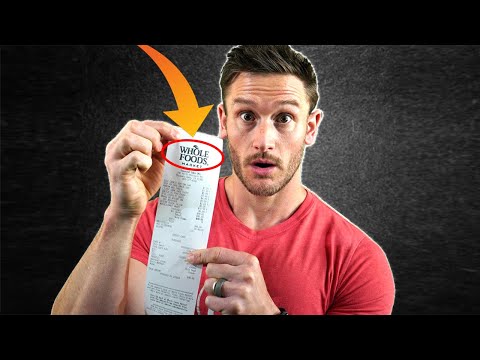 We went to Whole Foods. Now, let me explain a little bit more of what I’ve got in front of me. I’m going to start with the bison tallow. The bison tallow is great, because we end up with a nice, good quality saturated fat that is going to be very high omega-3. Bison has one of the highest omega-3 that you’re going to find in any kind of meat.

Then I have Flackers. Flackers are cool because they’re a flax seed cracker.

Now, flax seed is a soluble fiber, so it draws a lot of water into your colon, which means that you get more for the buck with your fiber.

One gram of soluble fiber could draw in five grams of water, so we end up getting more of a fiber effect with less of a risk. You don’t need much of these.

I don’t go overboard, because again, like I started to mention in the store, the alpha linolenic acid is an omega-3 that’s very difficult for the body to convert.

You’ve probably seen Lily’s chocolate chips, you can get them at other stores. They’re just great to add to yogurt. They are fairly high in erythritol.

Then you saw that I grabbed these Love Good Fats bars. The reality is, I know Susie, who started this company, and I know her really well. She’s a really sweet lady, she’s up in Canada. I met her back in Toronto before.

I want to do them an awesome service and provide everyone with a discount, so down below in the description, you can get your hands on these Love Good Fats bars, which are super high in prebiotic fiber.

That’s the nice thing about it, it helps support your healthy gut biome, so you’re ending up getting this really good satiating feeling with a bar that is totally keto approved, and quite honestly, it tastes like ice cream. I don’t even know how to describe it.

Then, I have the Bitchin’ Sauce. What I usually do is take the Flackers, dip them in there, that’s a perfect little treat. The caveat here, the grapeseed oil, I see what they were going for, grapeseed can be a healthier oil, but I’m still not a big fan of it. Water, almonds, grapeseed oil, lemon juice, nutritional yeast, Bragg liquid aminos, garlic, chipotles, spices, and sea salt. Pretty darn good ingredient profile.

Then, I’ve got this nut cheese. This is actually aged nut cheese, which is pretty cool. This stuff is from Parmela Creamery. I discovered it when I was on that vegan keto diet. So we’re getting those good MCTs, we’re getting a good healthy saturated fat, medium chain triglycerides, of course, and then also the lauric acid in a cheese form.

I’ve seen coconut wraps come up before. Pretty cool. This one, coconut meat, coconut water, organic virgin coconut oil. That’s it. One wrap is 70 calories and five grams of fat and a bunch of fiber.

So, these are some simple keto foods that I like that you can get at Whole Foods.

Which of the 5 TYPES of Keto are for YOU? Carb Cycling, Carnivore, etc

Which Fermented Foods You Can Eat on Ketogenic Diet? – Dr.Berg