You are here: Home1 / All Articles2 / Keto Course3 / We Bought Everything on the Chick-Fil-A Menu and Reviewed the Ingredie...

More specifically, you want help with We Bought Everything on the Chick-Fil-A Menu and Reviewed the Ingredients?

This Post Was All About We Bought Everything on the Chick-Fil-A Menu and Reviewed the Ingredients. 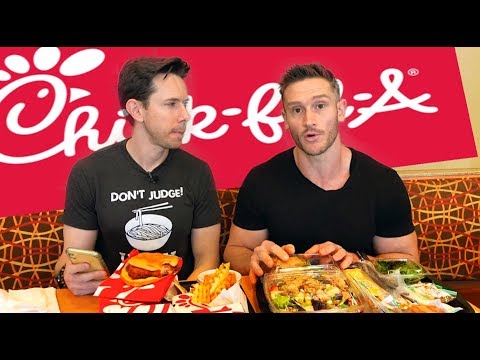 We are going to order a few things, get a table, and breakdown everything.

Sweet and Spicy sriracha, ingredient number 1, sugar. None of these sauces are going to work. The honey mustard has no oil so, if you aren’t on a keto diet, it’s the healthiest option.

This chicken is obviously a GMO chicken. It’s probably a in house chicken, not let outside to roam. Also, its probably a chicken beast that is pumped up with sodium solution and probably bleached after it’s killed. We know it’s not a high quality chicken breast. And it’s fried.

You never notice when you eat something from a fast food place all of a sudden you feel like “wow! I want to eat more of that!”, It’s because it has modium sodium glutamate in it. The whole purpose of that is it lights the glutamate cycle of your brain up. Now, what that does it tells your body, more more more. It’s not that its unhealthy, it just has an affect of your brain where it affect your sleep etc.

5 bucks, is pricey for this. Go across the street to whole foods and you’ll spend less for better chicken. Bread already is a no go! Bacon, thats surprising. Wow, its real cheese! Thats not bad. Bad bacon, is really BAD. I’ll leave it on for Bobby. Keto friendly but not tasty.

The salad, if you ate around the apples, this is a pretty good keto meal. Not the best but kinda passable. Talk about value, that looks like chicken but thats the wrap. You are better off buying a salad and asking for double chicken. It looks like its kobe cheese, yup it is. It’s the same. it’s not going to be good.

This is the ingredients for the potatoes: Disodium dihydrogen pyrophosphate, sea salt, canola oil.

For more, in depth knowledge, watch the video in its entirety – and, as always, keep in lock ed in here for future videos!

How Decisions Affect Our Lives

Why Do I Get Sick When I Exercise? Scroll to top