there's a ton of videos talking about vitamin d and mood but i'm not really interested in talking about the mood because it can be very like subjective to talk about oh vitamin d helped these people say that they feel better well okay yes there is a lot of validity because there's a lot of volume of those .

Studies but i actually want to talk about like more hard data and mechanistic action with vitamin d and mental stress and can vitamin d having sufficient amounts of vitamin d potentially help protect you from the negative impacts of mental stress it's pretty wild stuff so let's go ahead and let's break it down so to first .

Can be very bad right so when you take a look at people that have existing risk factors with like coronary artery disease you can look at hard data with vitamin d and get some pretty good solid results so this at least gives us something a little bit more tangible than looking at vitamin d levels being low or .

High and then giving someone a questionnaire on their mood not saying that's bad it's just not as concrete now there are some things we already know about vitamin d that could have to do with stress and even the heart right vitamin d definitely plays a role with the metabolism of what are called catecholamines okay catecholamines are .

Our stress response like our adrenaline our epinephrine things like that when we don't metabolize catecholamines right it means that they are more circulating when there shouldn't be circulating there are fight or flight response so sure we want them to be there when they need to be there but if vitamin d plays a role in the metabolism of those .

Catecholamines that could play a role in how it impacts our stress levels and our body's response to stress even at the cardiac level the other one that's discussed a lot is vitamin d and the endothelial function okay vitamin d plays a role in how our like vascular system sort of responds to stress too i'm not going to focus so much on that .

One because that's not my wheelhouse but i do want to dive into a study it's pretty interesting it was published in the journal psychosomatic medicine took a look at 255 individuals with coronary artery disease and again it was setting out to measure mental stress induced myocardial ischemia mental stress that induced reduced blood flow to the heart .

So what they did is they gave them a mental stress situation they put them under mental stress and they were imaging their heart so they were able to see when they are under stress what's it doing to their heart okay now before they took this test they measured their vitamin d levels okay so of this whole group of 255 people 12 .

Percent of them ended up with myocardial ischemia they ended up having restricted blood flow to the heart not a good thing right but of those 12 percent a huge number of them just so happen to be the ones that were deficient in vitamin d correlation does not equal causation but what the researchers did is they said .

Let's adjust for confounding factors so they adjusted for all kinds of things that could be at play different variables and still it ended up with wow lower vitamin d levels seem to be linked with less ability to deal with mental stress those that had sufficient levels of .

Vitamin d seemed to be the ones that were able to withstand mental stress without the ischemia without the negative impact well that's really flabbergasting well what the heck is the mechanism right like or what's going on it likely has to do with serotonin vitamin d plays a very powerful role .

Some degree although it's not a fatty fish but there's still some omega-3s in it we're looking at like mackerel all the high like omega-3 vitamin d rich fish and by the way if you're gonna eat fish you really should try to get the ones that have like a little bit of the bones in it i know it sounds crazy and even .

The skin because you have more vitamin d in that getting vitamin d from a whole food form i'm going off on a tangent a little bit is always better because you have the vitamin a that's alongside it they kind of work in tandem okay and you're allowing just all these different things to take place in a little bit more of a biological way so anyhow let's .

Stimulus whatever a lower heart rate variability means you're really sitting in the sympathetic nervous system and your body doesn't have a lot of give so this study was published in the journal psychophysiology took a look at 47 participants they had a fatty fish group and a non-fatty fish group and it turns out at the end of the study that the .

Fatty fish group had a higher high frequency heart rate variability score and they ended up measuring better in terms of dealing with mental stress so does that mean that going out and eating a piece of salmon or can of sardines is magically going to fix all your issues no it certainly doesn't but it kind of continues to beg the question .

Is it a vitamin d situation that is at play there people that are maybe deficient in vitamin d so when you look at vitamin d like with sardines and everything like that you're also looking at other things right you have omega-3s that are in the mix you have all these other things that have been shown in research to be good for the heart i want .

To get into the mechanisms in just a second i will say today's sponsor is a company called thrive market and the reason i mention them is if you're looking for things like sardines or you're looking for even like salmon jerky or mackerel or anything like that i would definitely recommend you check them out they're a .

Sponsor on this channel they have been for a number of years but there's a link down below so that way if you want to try out thrive market you can save 25 off your first order but also get a free gift and you do use that link down below i mean you don't just have to get fatty fish you can get all kinds of things all the pantry staples you want macadamia .

Nuts stuff like that and again that link is going to save you 25 off your first order so definitely recommend you check them out and a big thank you to thrive market for the continued support on this channel as well so use that link down below so there's a lot of ambiguity when we look at stress and mood because it's obviously confounding factors right .

So we take those into consideration but i do want to address the mechanistic action of vitamin d and serotonin so a lot of our ability to deal with stress comes with the proper functioning of our serotonin pathways serotonin is the neurotransmitter that helps us feel good helps us feel calm and relaxed so where .

Does vitamin d come into play the active form of vitamin d3 is signaled through a region of our brain called the vdr okay now this signal impacts the gene expression of a couple of different things in this particular case it's affecting the expression of what's called tryptophan hydroxylase this is something that is very important is an .

Enzyme that is important for the proper really combination of tryptophan to ultimately make serotonin i don't know if you know this but tryptophan the amino acid that's in a lot of meat and turkey things like that is a real solid building block of serotonin okay so vitamin d3 affects the gene expression of the enzyme that allows us to use .

Tryptophan so if we're potentially low in vitamin d3 we are potentially not able to synthesize as much of that or utilize that much of the tryptophan this situation affects the gene expression of what is called a serotonin reuptake transporter now you've probably heard of serotonin reuptake inhibitors you've heard of ssris a transporter is similar .

Affect your mood but it can potentially affect sleep too because if we're not creating serotonin serotonin is a precursor to melatonin so it is a little bit of one of those situations like which came first the chicken or the egg are you not sleeping well and then you're stressed out and that's affecting things or your serotonin levels low and .

You're not producing melatonin and not sleeping well you can see how you can just go on and on and on but a common denominator that continues to rear its ugly head seems to be low levels of vitamin d okay now i'm not a doctor i'm some guy on the internet but i can probably make the solid suggestion that adding a little bit of fatty fish or .

This Post Was All About Vitamin D Reduces Negative Effects of Stress – Really Cool Research!. 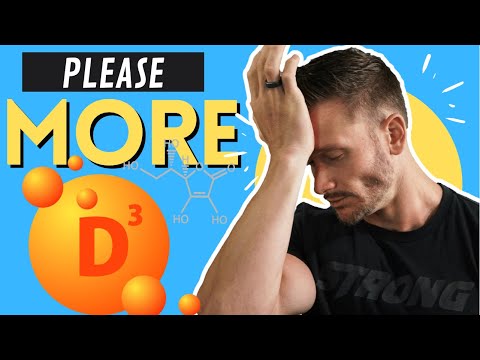 Join Thrive Market today to get 40% off your first order AND a FREE gift (today’s sponsor)!
s

Should You Skip Breakfast?

The FASTEST Way to Rid Acne – Dr. Berg
Scroll to top
We use cookies on our website to give you the most relevant experience by remembering your preferences and repeat visits. By clicking “Accept”, you consent to the use of ALL the cookies.
Do not sell my personal information.
Cookie SettingsAccept
Manage consent