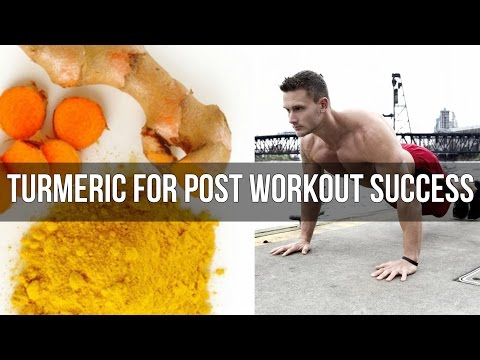 Curcumin for Muscle Soreness
Turmeric Post Workout | Reduce Soreness and Control Inflammation: Thomas DeLauer
While regular exercise is linked to decreased inflammation, exercise in and of itself creates an inflammatory response
Acute exercise vs chronic exercise: difference between measurements taken after a single bout of exercise when compared to long periods of consistent exercise
A single session of exercise will increase inflammatory cytokines, oxidative stress and leukocytosis
Following chronic exercise, or exercising regularly, both reduced inflammatory markers and increased anti-inflammatory substances are found
How can both of these be true?
Exercise puts stress on the body – without stress we do not grow
This stress creates an inflammatory response to help and heal the muscles that have been worked.
Reactive oxygen species are created when we workout and muscles and other body tissues are damaged
Inflammatory cytokines are produced as part of the healing process
These inflammatory substances lead to muscle pain and performance deficits
You may have heard tips to not spend too long at the gym or it can be hard on your body – this is due to inflammation.
When we work out too hard or for too long, the inflammatory response will be longer, and we will feel increased pain, such as delayed-onset muscle soreness
In order to get back to working out, we want to employ both smark workouts and diet to help us reduce inflammation and heal quickly.
Turmeric and Inflammation
Turmeric, and particularly the most active component curcumin, have been shown to have anti-inflammatory effects in the human body
This impact also helps with muscle soreness and fatigue
A 2007 study took mice and had them run on treadmills, either uphill or downhill, with or without curcumin in their diets. Downhill running leads to more muscle damage.
The mice were then split into three groups: one group ran on a treadmill until fatigue 2 and 3 days following the first exercise, one group’s voluntary wheel running was recorded for 7 days, and another group had their muscle inflammatory cytokine concentrations measured.
It was found that for the downhill mice, the curcumin group was able to run longer at both 48 and 72 hours than the placebo group, experienced greater voluntary wheel running for the first two days than the placebo group (both were the same day 3 on), with lower levels of all three inflammatory markers measured 1 and 2 days following the initial treadmill exercise – some but not all of the differences were significant, but all inflammatory markers measured were less for the curcumin group as compared with the placebo.
References
1. Chronic low-grade inflammation after exercise: controversies
/