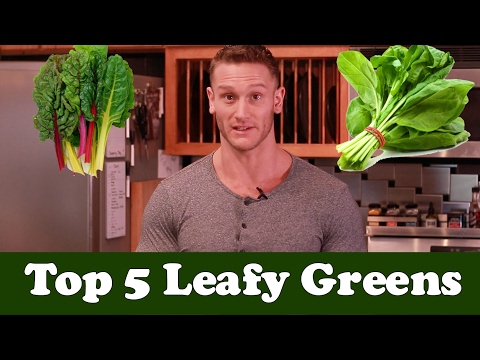 Top 5 Leafy Green Vegetables: Reduce Estrogen & Boost Hormones – Thomas DeLauer:
Cut through the fluff and the noise and let’s get down to brain, body, family and business –
Consuming fruits and vegetables in large quantity and variety is crucial to living a healthy life. We can break out the benefit being due largely to three categories: fiber, vitamins and minerals and phytochemicals.
Fiber – increased fiber is tied to decreased obesity and cardiovascular troubles.
Vitamins and minerals – play a role in every bodily function. Increasing quantity and variety of vitamins and minerals will reduce likelihood of disease while keeping you feeling energetic and healthy.
Phytochemicals – encompasses antioxidants, anti-inflammatory agents and phytoestrogens. Help protect cells from damage. Different fruits and vegetables have different nutrient composition, with leafy greens often leading the pack in health benefits. So which leafy greens are best? A study in in 2014 published in Preventing Chronic Disease set out to try and rate so-called powerhouse fruits and vegetables (PFV) based on nutrient density. Powerhouse fruits and vegetables are the fruits most correlated to a reduced risk of chronic diseases, such as diabetes and cardiovascular disease.
-PFV foods were here defined as those containing 10% or more of the daily value per 100 kcal of 17 nutrients correlated with the largest health benefits. 47 foods were studied with 41 satisfying this rule and were more nutrient-dense than those not defined as PFV.
-To give each of these foods a score, both the nutritional content of the 17 nutrients along with the bioavailability of each was evaluated.
Here is a list of my favorite five and how they benefit your health:
4 of the five of those below were in the top 10 scoring PFV, with the other yielding some benefits different from the others that I find valuable. These leafy greens are also discussed widely for their nutritional value.
5. Collard Greens: 10th highest nutrient density score on above mentioned PFV study (2)
-Very high in vitamins K and A, which are crucial for bone health, brain function and eyesight. (3)
-High in the carotenoid lutein, which is especially important in eye health, particularly the retina. (4)
-Help lower cholesterol due to ability to bind with bile acids in the digestive system, helping to remove excess cholesterol. (3)
-Very bitter, so better to lightly saute and season rather than juice. (3)
4. Kale: *Protein powerhouse!
-While not in the top 10 PFV, still considered a PV.
-Contains all 9 essential amino acids – very good food for vegetarians
-More omega-3s than omega-6s.
-Contains greater than your daily recommended quantities of vitamins C, A and K1. These are important for bone health, eyesight, brain functioning as well as vitamin C being a powerful antioxidant.
3. Spinach: 5th highest nutrient density score on above mentioned PFV study (2)
-High in protein, niacin, zinc, fiber, potassium, calcium and vitamins A, C, E and K, just to name a few. (3)
-Also high in the carotenoid lutein, which is great for eye health, as mentioned earlier. (4)
-One of the best foods for brain health and function. Boost your memory ability with this superfood. (3)
2. Beet Greens: 4th highest nutrient density score on above mentioned PFV study (2)
-Many people purchase beets with the stems and make the mistake of cutting off the beet greens, which are more loaded nutritionally than the beets themselves! (4)
-Contains vitamins K and calcium, making it great for bone health. This may also help to fight Alzheimer’s disease. (3)
-Even more iron than spinach, which is crucial for everyone, but especially women and vegetarians, who are often found to have low iron levels. (3)
-Also high in vitamins A and C and magnesium. (3,4)
1. Swiss Chard: 3rd highest nutrient density score on above mentioned PFV study (2)
-Packed with vitamins C, E, and A, magnesium and zinc. (3)
-Syringic acid helps to regulate blood sugar and thus can be helpful for those with diabetes. (3)
-Contains kaempferol, a flavonol linked to decreased risk of cancer and chronic diseases (3).
-Ranked as number 1 due to the ability to detoxify your body. Betalin pigments in swiss chard help to excrete toxins from your body. (3)
References:
1. Health Benefits of Fruits and Vegetables
2. Defining Powerhouse Fruits and Vegetables: A Nutrient Density Approach
3. Mercola
4. Beet Greens
1

Coconut Oil vs. MCT Oil: What’s the Difference? | Saturated Fat | Brain Health- Thomas DeLauer
Before & After Keto – Intermittent Fasting with Dr. Berg & Michelle Spiva
The 5th Body Type – MUST WATCH!
Can’t Sleep on Keto? You’re not alone (insomnia)
Sugar & Carb Withdrawals: How to Bounce Back
10 Things to Add to Your Coffee for Boosted Benefits
How To Make THE BEST Healthy Oatmeal Raisin Cookies Recipe | ONLY 100 CALORIES
Do We Need Supplements (Vitamins & Minerals) If We Are Healthy?

What Is An Amino Acid?

Does Ketosis Cause Hypothyroidism? Scroll to top