This Post Was All About The Truth about Magnesium & Copper: Food Industry Secrets- Thomas DeLauer. 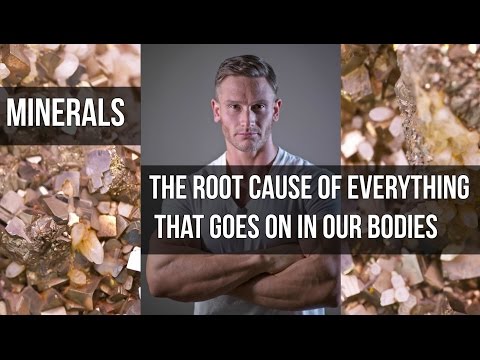 Click Here to Subscribe:
My Favorite Magnesium: bit.ly/JigsawMagSRT
Magnesium is a mineral that many of us are deficient in because of the standard American diet. The numerous ways that magnesium deficiency are detrimental to health are many and with deeper understanding, the list continues to grow.
-Impacts nerve and muscle health
There are 18 essential minerals that play roles in all of our body processes. There are 4 that are of particular importance for liver and body health and balance: magnesium, calcium, iron and copper. These 4 are so important because much of our adverse health problems are caused by too much iron and too little magnesium. Magnesium and calcium act together as counterbalances. For example:
-Mg calms cells, Ca excites them
-Mg necessary to relax muscles, Ca (in concert with potassium) cause muscles to contract
-Mg plays a role in keeping blood flowing; Ca is involved in blood clotting
-Ca contributes to bone hardness: Mg found mostly in soft body structures
-Ca is involved in the fight-or-flight response and in inflammation; Mg is involved in balancing this through calm and reducing inflammation
It follows that if we are stressed, maybe caused by work, life, or even extreme exercise, we need plenty of magnesium to regain balance. Magnesium burn rate is the rate at which we burn magnesium. It appears that this rate increases as we age. The idea is to fix mitochondrial functioning through the balancing of magnesium, calcium, iron and copper.
Why these four minerals? We have already discussed the importance of calcium and magnesium, so now we should understand iron and copper. Iron is the #1 most abundant mineral on earth. As we go through life, we accumulate iron. Mg and Fe fight over available oxygen. These two mineral events criss-cross at about 40 – when much of the illness, aches and pains kick in. This is largely due to excess iron and deficient magnesium. Iron oxide is involved in the aging processes inside of our mitochondria. It changes enzymatic pathways and can cause a lack of ATP, which our bodies need to function! ATP doesn’t work unless it is complexed with magnesium, which affects the functioning of 3700 proteins in the body. As we go through stress iron builds up in the liver, and as we age magnesium burn rate increases. This rate is also higher when we are under stress.
Copper is another important mineral – you can’t make ATP unless you have bioavailable forms of copper. Copper is the mineral that makes sure that things are oxidized properly.
Dr. Morley’s RCP:
Concentrate on the stops and the starts to get this in balance.
Stops:
1. Stop taking hormone/vitamin D
a. V D stops the liver’s production of ceruloplasmin
i. Low vitamin D due to low magnesium. Every facet of VD metabolism is magnesium dependent. Taking VD can make the situation worse
2. Stop taking calcium and iron supplements
3. Stop taking ascorbic acid
4. Stay clear of high fructose corn syrup and colors
5. Stop lowfat – have plenty of fat in the diet, it is important
6. Stop using industrialized oils based on omega-6 fats
7. Steer clear of fluoride – far reaching and profound effect
8. No multivitamins or prenatals
9. No citrate – disrupts liver’s ability to make ceruloplasmin
10. No colloidal silver – it impacts copper status (silver sits below copper on the periodic table)
Starts:
1. Use cod liver oil
2. Start magnesium supplementation
3. Whole food vitamin c
4. Forms of B-vitamins from way of mother nature – bee pollen, rice bran, beef liver
5. Use silica – helps to pull aluminum out of the liver
6. Start ancestral diet
7. Take boron, taurine and iodine
Learn to distinguish between functional and absolute iron deficiency – almost impossible to have a total shortage of iron, but you can have a shortage of functional iron. Happens when don’t have enough bioavailable copper. Anemia of chronic inflammation leads to low Mg, low ceruloplasmin, low serum iron, etc. Excess unbound iron will lead to a loss of magnesium due to pH of a cell to be too acidic which leads to magnesium loss which leads to inflammation. Inflammation is a clinical indication of deficient magnesium, which was originally determined in 1992 in a study on rats where magnesium deficient diets led to an increase in inflammatory markers. Inflammation is a gateway to many diseases. Additionally, pathogens feed on iron, so we do not want to have excess iron levels in our diet.
References:
1. Center for Magnesium Education and Research
2. The Root Cause Protocol
3. Pathobiology of magnesium deficiency; a cytokine/neurogenic inflammation hypothesis
4. Magnesium: The nutrient that could change your life
l 5 Things that Make You Susceptible to an Infection

Why “They” Don’t Want You to Do the Ketogenic Diet