This Post Was All About Sodium: Which Salt Minimizes Water Retention? – Thomas DeLauer. 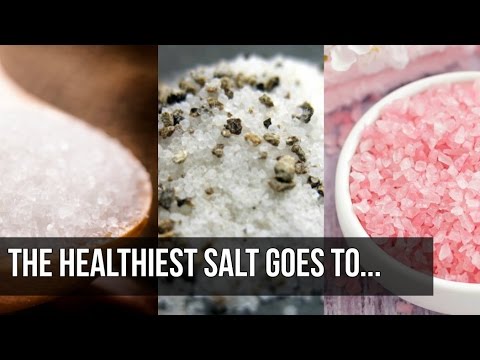 Sodium: Which Salt Minimizes Water Retention? – Thomas DeLauer… Visit My Site for more: Not all salts are the same – the differences include:
Healthfulness, how they are made, texture and flavor.
Iodized salt:
The least healthy of the salt options – highly processed
Traditional table salt:
Generally obtained through salt mines/ processed to eliminate minerals with a chemical added to stop clumping. Iodized salt has iodine added, which is a trace element that we need for health, however this is found naturally in alternative salt options.
Pink Himalayan Salt:
A healthier salt option as it is mined from salt caves that are stone ground.
Benefits Include-
Trace minerals and elements remain
Provide good taste and color
May contain around 80 trace minerals and elements – some of these include iodine, magnesium, zinc, iron and potassium.
Minerals play an integral part in our health, including but not limited to:
Thyroid health
Hearth health
Bone strength
Weight management
Nervous system function
The way we eat leads many to be deficient in minerals – due to lack of soil quality and lack of quality food consumed.
Truffle Salt:
This is the healthiest option and is earthy with an almost meaty flavor.
Sea salt with pieces of black or white truffle- Sea salt contains the trace minerals and elements.
Truffles:
A fungi that grows underground
Mushrooms and truffles have been known to have health benefits since early civilization.
Nutrients include:
High in protein
All essential amino acids
Fiber
Many essential minerals, including?
Magnesium
Calcium
Potassium
Iron
Zinc
Health benefits:
Antimicrobial
Antioxidants
Antiinflammatory
Immunomodulators
References:
1. What’s the difference between sea salt and table salt?
2. Minerals in Himalayan sea salt: spectral analysis
3. Mushrooms and truffles: historical biofactories for complementary medicine…
/

Dr. Berg hosts a webinar on Anti-Aging and food