This Post Was All About Real Bacon vs. Turkey Bacon: The Truth Hurts. 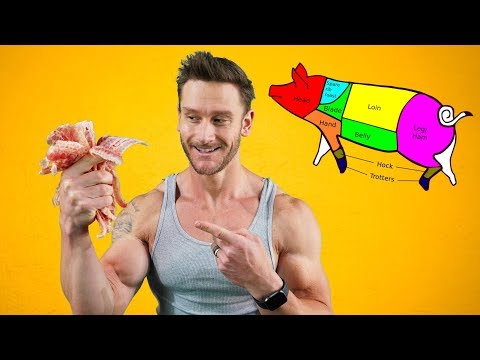 Click Here to Subscribe:
Get Grass-Finished Meat Delivered Directly to your Doorstep with Butcher Box:
My Website:
Real Bacon vs. Turkey Bacon: The Truth Hurts – Thomas DeLauer
Nutrient Overview
Selenium
This is a nutrient that’s a key component of a healthy thyroid gland and it reduces inflammation by inhibiting NF-kB and its activation of interleukin-6 and TNF-alpha production
Selenium is also able to enhance proliferation of cytotoxic precursor cells, which give rise to the crucial T immune cells that fight cancer and viruses within the body
Selenium is also essential to the proper functioning of glutathione peroxidase – glutathione is 100% dependent on having a selenium atom at its core for proper function
Choline
Choline is a precursor to the neurotransmitter acetylcholine – specifically, choline is transported into the cell by a transporter protein in the membrane of the presynaptic neuron where it combines with acetyl CoA to synthesize the neurotransmitter acetylcholine
Fat Content
The fats in bacon are about 50% monounsaturated, with a large part being oleic acid, and about 40% being saturated fat, accompanied by a decent amount of cholesterol and the remaining fat being 10% polyunsaturated
Brief Saturated Fat Benefits
Our brains are composed of 60% fat and the majority of the fat in the brain is saturated
Saturated fat acts as the insulation coating for your nervous system – when you lack this insulation you become more susceptible to external and internal stress
Specifically, the myelin sheath that surrounds the nerves in the brain and ensures their proper function is also largely made of saturated fat and cholesterol
Saturated fats can reduce levels of lipoprotein(a), a known risk factor for cardiovascular disease – has a high affinity for the arterial wall and displays many athero-thrombogenic properties
Oleic Acid
Oleic acid also benefits the myelin sheath as it’s one of the most common fats in myelin
Oleic acid regulates the activity of adrenoceptor signaling pathways which direct the adrenergic receptors (α- and β-adrenoceptors) that help regulate blood pressure
Oleic acid can also increase fat oxidation as it increases the expression of genes involved in fat burning
Specifically, oleic acid stimulates the cAMP/protein kinase A pathway and activates the SIRT1-PGC1α transcriptional complex to modulate rates of fatty acid oxidation
Processing Differences
Turkeys don’t have a belly to slice bacon from (turkeys do have a belly, but you aren’t going to get very big slices)
Meat processors make turkey bacon from ground up turkey and flavor it to taste like bacon
Ground up dark meat is layered on ground up light meat, and the product is kind of like turkey sausage
These layers of different shades of meat, using ground turkey, allow the processors to add in as little or as much fat as they like (in pork bacon, the amount of fat is dictated by how fat the pig belly was)
Turkey Concerns
Ractopamine
Turkeys are given ractopamine, an asthma-like growth enhancer, used to quickly add muscle weight to factory farmed turkeys (turkeys get so overweight they can barely walk and can’t breed themselves)
Ractopamine is banned in 160 countries and widely viewed as dangerous to animals and humans, but ractopamine was approved by the U.S. Food & Drug Administration (FDA) for use in turkey in 2009, under the brand name Topmax – it has never been labeled
The active ingredient in Topmax, ractopamine hydrochloride, is a beta-adrenergic agonist
Antibiotics
Antibiotics are widely used in turkey production to produce weight gain with less feed, and to stop disease outbreaks from crowded conditions
Until 2015, an arsenic-containing drug called Nitarsone was FDA-approved for the “first six weeks of a turkey’s 20-week life span”
Inorganic arsenic is an established human carcinogen, known to cause cancers of the lung, skin and bladder and possibly cancers of the liver and kidney
Turkeys can suffer from Aspergillosis (Brooder Pneumonia), Avian Influenza, Avian Leukosis, Histomoniasis, Coccidiosis, Coronavirus, Erysipelas, Typhoid, TB, Fowl Cholera, Mites, Lice, Herpes, Clostridial dermatitis, Cellulitis and much more due to their living conditions
For example, the anticoccidial drug halofuginone which the Federal Register says “is toxic to fish and aquatic life” and “an irritant to eyes and skin” has been found in turkey as well as the endocrine disrupter Bisphenol A (BPA) Should You Count Calories? (Enough Already!) Type 1 Diabetic’s Guide to FASTING! Why Keto and Fasting = AMAZING!

Use Epsom Salt for Toenail Fungus