This Post Was All About Is Creatine Safe? | Creatine for Muscle and Brain Performance- Thomas DeLauer. 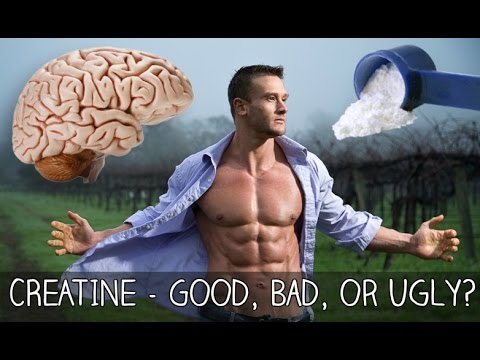 Is Creatine Safe? | Creatine for Muscle and Brain Performance- Thomas DeLauer:
Finally, one of the most popular questions! Is Creatine Safe? Want to Chat with me? Go to http:/www.ThomasDeLauer.com
We are constantly burning energy. This energy ultimately comes from the food that we eat. Through the Krebs Cycle ATP is created, and this is what is used as fuel in our cells.
ATP is created through three pathways, depending on the type of activity we are performing:
1. Phosphagen – for immediate and short lived energy needs
2. Anaerobic Glycolysis – slower than #1, does not need oxygen
3. Aerobic Glycolysis – slowest, requires oxygen
Phosphagen:
When ATP is broken down for energy, what is left is ADP and a phosphate group. Creatine phosphate combines the phosphate group with the ADP to quickly create more ATP for immediate energy needs. Very little ATP and creatine phosphate is stored in muscle cells. Pathway used to create energy at the onset of exercise as well as for quick exercised lasting about 1 to 30 seconds, such as kicking a ball, a fast sprint or lifting weights.
Where does creatine come from?
Creatine can either come directly from your diet or can be produced by the liver and kidneys using amino acids. When you consume more creatine you produce less in the body.
An early study on creatine supplementation found a 20% increase in the stored creatine and phosphocreatine in the body when participants consumed 20 grams of creatine for several days in a row. This increase looks to be the upper limit with the remaining being excreted through urine. Many studies have shown benefits of creatine supplementation, including bench press, sprinting, high intensity exercise, among other fast cardio and weight training type workouts.
Side Effects:
Unfortunately studies have examined safety of creatine for less than two weeks, not for long term use. Many possible side effects include dehydration, muscle cramping, nausea, kidney damage and kidney stones, and renal damage. Creatine supplements are not monitored by the FDA and thus there is the danger of impurities in supplements.
Creatine as a Nootropic:
Nootropics are substances that people use to enhance their brain function, giving mental clarity, energy and health. Five percent of the creatine stored in our bodies is found in our organs, such as the brain. For your brain to work quickly, it needs readily available energy stores just like your muscles do! Neurons rely on the fast phosphagen cycle to create energy for communication. Vegetarians have been found to have lower levels of creatine stores in their brains. One study found creatine supplementation to enhance performance on some skills related to cognitive function.
Tips:
You can find dietary creatine in meats, particularly beef, wild game and wild caught fish. A common study protocol was to have participants take 20 grams per day for 5 or 6 days, so be sure not to exceed that quantity. It’s only beneficial for short duration, high intensity exercise, not for endurance sports.
References:
1. The three primary energy pathways explained
2. Creatine supplementation in athletes: review
3. Cognitive effects of creatine ethyl ester supplementation
4. Functions and effects of creatine on the central nervous system
7 Keto Over Age 50 – Benefits and Considerations

The Highest Vitamin C Food… on the Planet

What is Amyotrophic Lateral Sclerosis (ALS) or Lou Gehrig’s Disease?

Bodybuilding Full Day Of Eating | Turkey Chili and Pumpkin Cake | What I Eat...More Than Just Recipes…I’m Competing?! Scroll to top