This Post Was All About Intermittent Fasting Tip: Fasting When You’re Sick. 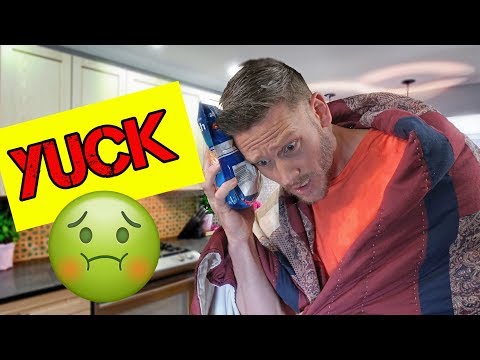 Click Here to Subscribe:
Website:
Get the Apparel I Wear at
Intermittent Fasting Tip: Fasting When You’re Sick
Common cold and flu-like symptoms can be caused by either viruses or bacteria
Cold and flu infections are initially caused by viruses, specifically the rhinovirus and influenza virus
However, being infected with these viruses lowers your defense against bacteria, raising your chances of simultaneously developing a bacterial infection, whose symptoms are often similar to your initial ones
abstaining from eating limits the supply of nutrients, such as iron and zinc, that the infecting agent needs to grow and spread
For example, with fever, iron sequestration participates in the inhibition and killing of bacterial pathogens
During the APR, plasma levels of iron are reduced – Iron is a critical micronutrient involving numerous cell functions in prokaryotes and eukaryotes, and is especially important in proliferating cells
Although adequate iron is needed for a properly functioning immune system, the host must strike a balance between providing for its own needs and defenses while minimizing access to iron by pathogens
The importance of iron for bacteria and fungi is highlighted by their production of iron- trapping siderophores that increase the ability of pathogens to compete for this critical micronutrient.
*In short, fasting may be best to promote healing from bacterial infections, while eating food may be a better way to fight viral infections*
When animals are infected they stop eating and they switch to a fasting metabolic mode
*Fever is intracellular and food increases IFN-y (fever); cold is extracellular and fasting increases IL-4*
The adaptive immune response uses different strategies to ward off infection by pathogens – a subset of T lymphocytes, the CD4-expressing T helper (Th) cells, are important in directing this strategy
So-called Th1 cells primarily stimulate the cell-mediated immune response against intracellular invaders by activating macrophages and CD8+ cytotoxic T lymphocytes
Th2 cells favor the B-cell-dependent humoral immune response against extracellular organisms
Whereas gamma interferon (IFN-γ) is the hallmark Th1 cytokine, interleukin-4 (IL-4) is an important Th2 cytokine
Which is why, in cases of mild or moderate illness, it’s likely worth a try – so the saying, “Feed a Cold, Starve a Fever” might have some merit
Fasting may be best to promote healing from bacterial infections, while eating food may be a better way to fight viral infections
Colds are viral and fevers are bacterial
With a fever, the benefits are:
Promoting apoptosis of infected or neoplastic cells; eliciting pathogen heat shock proteins (HSPs) to enhance immune responses; invoking host HSPs that protect against pathogen damage; enhancement of inflammatory/immune cell function; and downregulation of immune responses by promoting apoptosis of lymphocytes and neutrophils
Increased amounts of glucose are used by infected cells; and tumor cells and other proliferating cells shift to aerobic glycolysis
Thus, proliferating pathogens are susceptible to increased nutrient needs and to the vulnerability of replication and synthesis
Bacteria feed off food
Viruses aren’t alive so no point in starving them; help the rest of your cells instead
References
1) Feed a Cold, Starve a Fever? (n.d.). Retrieved from
2) Listening to the body: Study examines the effects of fasting on infections. (2018, January 8). Retrieved from
3) Why do we lose our appetite when we are ill? (2016, April 15). Retrieved from
4) MS, E. (n.d.). Infection-induced anorexia: active host defence strategy. – PubMed – NCBI. Retrieved from
5) BL, H. (n.d.). Biological basis of the behavior of sick animals. – PubMed – NCBI. Retrieved from
6) EK, L. (n.d.). Why infection-induced anorexia? The case for enhanced apoptosis of infected cells. – PubMed – NCBI. Retrieved from
7) Depression and sickness behavior are Janus-faced responses to shared inflammatory pathways. (n.d.). Retrieved from
8) Cytokine, Sickness Behavior, and Depression. (n.d.). Retrieved from
9) CR, P. (n.d.). Cytokines and anorexia: a brief overview. – PubMed – NCBI. Retrieved from 2 How to Get in Shape Faster by Being Kind to People

Use Vitamin B1 for Hyperthyroidism Symptoms

Get Restorative Sleep with Vitamin D

Is Honey a Better Substitute For Sugar?

When to Take Your Vitamins and Supplements17 Keto Snacks At WalMart | Best Low Carb Keto Snack Ideas, For Work, School,... Scroll to top