Blog - Latest News
You are here: Home1 / Keto Course2 / How to Eat Healthy at Mexican Restaurants

How to Eat Healthy at Mexican Restaurants

More specifically, you want help with How to Eat Healthy at Mexican Restaurants?

This Post Was All About How to Eat Healthy at Mexican Restaurants. 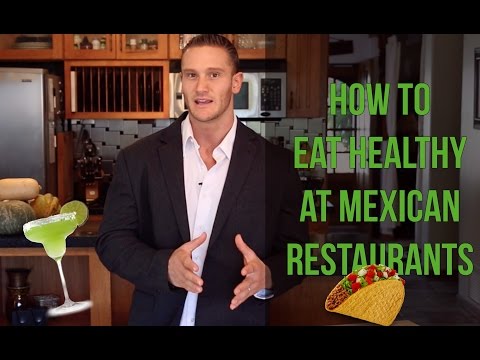 Eating at restaurants is difficult. But Mexican food has to be one of the most difficult. I also created a cheatsheet to help you order at any restaurant here:
In this video I explain how utilizing certain parts of Mexican food can actually help you lose fat and get in not only better shape, but think better throughout the rest of the day.
So many of us have to eat out a lot as part of our careers, but once you can arm yourself with what to eat at what restaurants, you can benefit from those situations, and also inspire those around you.
Mexican food uses a lot of lard. And generally speaking, it is not the best thing to eat, especially when it’s combined with refined carbs… But the trick is to avoid the refined carbs altogether and opt for things like fajitas when you go out to eat at Mexican food restaurants.
If you’re traveling a lot and business lunches and dinners are bringing you to restaurants, then you have to check out this video by Thomas DeLauer that shows you some of the ropes.

Do Not Do Carb Cycling on a Keto & Intermittent Fasting Plan

Alcohol and Ketosis, What you need to know!

What Does the Color of Urine Tell You About Your Body?

Fatigued on the Ketosis Diet? Here’s What to Do!Lose Weight: How to Get Your Family on a Diet- Thomas DeLauer Scroll to top