This Post Was All About Gluten Free Diet: The Truth About Grains- Thomas DeLauer. 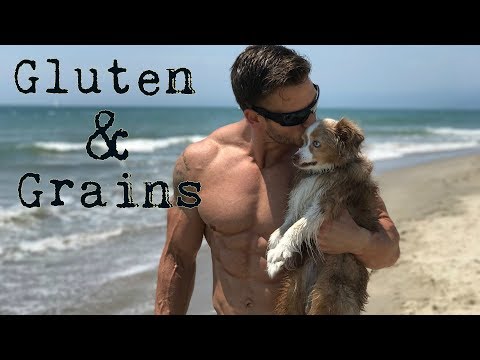 Be Sure to Subscribe for 3x Videos Per Week!
Gluten Free Diet: The Truth About Grains- Thomas DeLauer… Those with gluten trouble should also be cautious with other grains because of proteins known as prolamins. Prolamins are proteins that exist in the seeds of cereal grains.
Prolamins:
Gluten consists of a prolamin and a glutelin. Prolamins are storage proteins, and they are the “hardware stores” of the wheat structure that distribute amino acids central to the plant’s development. Glutelin is the “glue” that holds these hardware stores together. Wheat gluten itself consists of the prolamin gliadin and the glutelin glutenin. Gliadin stimulates zonulin, the traffic cop of the gut lining, to allow it to pass into our digestive tract largely undigested and interacting with tissue transglutaminase (tTG), an enzyme found throughout the body. Tissue transglutaminase is a critical part of how the body functions, and specifically, how the tight junctions in the microvilli (think hairy fingers) in our gut are formed. When tTG interacts with gliadin, it creates antibodies – enzyme that is such an important part of our body is now bad – body attacks itself.
Celiac disease is one of the most well-known gluten-related diseases, and those with the disease are advised to avoid more than wheat.
● Roughly 1% of people have celiac disease-
Besides wheat, the following grains contain prolamins:
Grain Prolamin Protein
Wheat Gliadin
Barley
Hordein
Oats Avenin
Corn Zein
Rye Secalin
Sorghum Karirin
Not all prolamins are believed to trigger celiac disease – the main ones are those from wheat, barley, and rye. Oats can be a trigger for some. So how do prolamins and gluten relate?
● The prolamin gliadin in wheat is the main protein that is believed to trigger celiacs, and gliadin is one of the proteins that makes up gluten. Prolamins can cause more problems than just celiacs disease. For those who react negatively to them, they can cause:
● Brain fog
● Joint pain
● Thyroid issues
● Chronic inflammation
● Increase intestinal permeability
Many of the negative effects are due to a proinflammatory immune response to prolamins.
In studies it was found that an increased production of proinflammatory cytokines occurred for both celiac patients as well as healthy controls, however the impact was greater for those with celiac disease. Studies have confirmed that gluten-sensitivity exists, and many who experience IBS have gluten sensitivity. Case Study: In a double-blind, randomized, placebo-controlled study on 34 patients with IBS and without celiac disease, it was found that those who followed the gluten-free diet experienced fewer IBS symptoms, pain, fatigue, and bloating as compared with those who consumed the gluten diet.
● 34 patients
● 6 weeks of a gluten-free diet with exception of two bread slices and one muffin per day. Either with gluten or gluten-free
● The mechanism was not discovered as tests did not generate significant differences between the groups, however the reported symptoms were significantly less for those without gluten. If you have sensitivity towards gluten, it is a good idea to replace grains with starchy vegetables, such as sweet potatoes and beets. For everyone, it is a good idea to cut grains out for a week and reintroduce them one at a time to see if you have any sensitivity.
Prolamins – signal same antibody as gluten because so similar – more on promelains
References:
1. Prolamin
2. Wheat starch, gliadin, and the gluten-free diet
3. The dietary intake of wheat and other cereal grains and their role in inflammation
4. Gluten causes gastrointestinal symptoms in subjects without celiac disease
Click here to learn about exclusive 1 on 1 consults with Thomas!
Subscribe to the Thomas DeLauer Channel Here: 1

Preventing a Mini-Stroke -TIA (Transient Ischemic Attack)How Do I Know If I’m Stressed? Scroll to top