This Post Was All About Epsom Salt Baths: Magnesium Absorption- Thomas DeLauer. 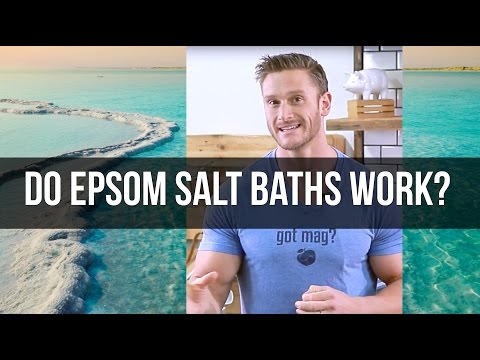 Click Here to Subscribe:
My Favorite Magnesium: bit.ly/JigsawMagSRT
Epsom salt is composed of magnesium, sulfate and water molecules. The most common suggested use is for the relief of sore muscle pain.
● No research to back this up for epsom salt specifically
● Warm water does help relax stiff muscles and joints
Baths are known to relax people, and thus an epsom salt bath can help those who are stressed. Another less discussed benefit that was demonstrated has been demonstrated is the possible absorption of magnesium and sulfate through the skin. *Not many studies out there to confirm this, however: A 2002 study looked at the ability of certain anions (negatively charged ions) and cations (positively charged ions) to be absorbed through skin in vitro and found that both magnesium and sulfate were able to penetrate skin.
There was one study conducted that examined this and found these compounds to be absorbed – if you read online you will find this study discusses a lot
● Study was not published
● Study was not peer reviewed
● There was no control group
This study was conducted at the University of Birmingham. 19 participants bathed in a bath with epsom salts for one week and had serum and urine sulfate and magnesium levels measured before and after the week of magnesium sulfate baths. Following 7 days of baths 17 participants experienced a raise in serum magnesium levels. The 2 participants that did not experience a serum raise in magnesium levels did experience an increase in urine magnesium levels. The study suggested this could be due to magnesium being absorbed and excreted due to serum magnesium levels already being sufficient. Similar results were found with regard to sulfate, with both serum and urine sulfate levels higher following 7 days of baths.
Mechanism was not studied – if it does increase these levels, it could be through skin, inhalation, etc.
*We want to be cautious due to limits of this study however, the previously noted in vitro study did find that these compounds could penetrate skin.
*More studies are needed before we should count on this for magnesium.
Unfortunately there is a lack of studies regarding magnesium sulfate and ability to be absorbed during baths. There is no downside in taking epsom salt baths – at worst, they can offer stress relief, but at best we may be boosting our magnesium and sulfate levels, reducing stress and helping sore muscles.
Magnesium sulfate is also used internally and intravenously in medicine:
● Laxative
● Eclampsia
● Irregular heartbeat
● Low magnesium levels
Thomas Creates Loads of Health and Fitness Videos, and you can get more of them at:
References:
1. Permeability of human skin to selected anions and cations – in vitro studies
2. Report of absorption of magnesium sulfate (epsom salts) across the skin
3. Why take an epsom salt bath?
4. Magnesium sulfate
s What Are Hormones And How do Your Hormones Work – Dr.Berg’s Webinar (Part 3) How to Burn Fat with Turmeric-Thomas DeLauer