More specifically, you want help with Does Cooking Vegetables Destroy Nutrients? How to Cook Veggies Properly?

This Post Was All About Does Cooking Vegetables Destroy Nutrients? How to Cook Veggies Properly. 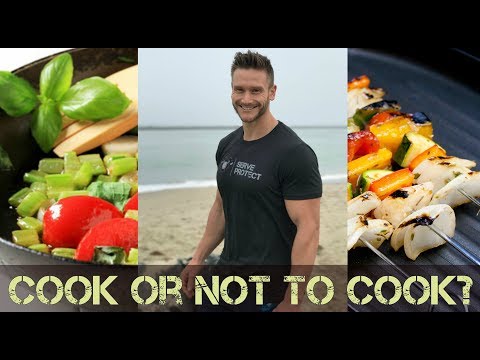 Please Subscribe for 3x Videos Per Week!
Does Cooking Vegetables Destroy Nutrients? How to Cook Veggies Properly
Vegetables are packed full of health-promoting nutrients, including vitamins, minerals, and phytochemicals.
The nutrient content can vary not only on the kind of vegetable, but also the way in which it was grown and the way that we cook it.
Of these, we have the most control over how we eat it – raw, lightly cooked through a variety of methods, or heavily cooked.
Cooking can alter the chemical composition of foods. This can lead to certain nutrients becoming more bioavailable and others breaking down or leaching from the vegetable into the cooking water.
Certain vitamins are water soluble, so these vitamins can leach from veggies when cooked in water, such as boiling.
On the other hand, some studies have found cooking to increase the antioxidant activity by freeing the antioxidant compounds.
Yet other studies have found a decrease in vitamin C from cooking, which is an antioxidant.
Here are a few examples of the conflicting evidence:
Case Study – Summary – This study found that, for red peppers and antioxidant activity, dry-heat cooking methods such as roasting and stir-frying retained more antioxidants, and the shorter the cooking time the better.
2012 study published in Preventative Nutrition and Food Science
A study was done on red peppers to determine the antioxidant activity of red peppers following boiling, steaming, stir-frying and roasting for 5, 10 and 15 minutes.
Multiple different healthful compounds were measured, including ascorbic acid content, total carotenoid content, polyphenol content, and radical scavenging activities.
It was found that all types of cooking reduced these measures of antioxidant activity, with boiling reducing them the furthest and stir-frying the least. With every cooking method, the more time that passed the more antioxidants that were lost.
However, other studies have found that the thermal processing of tomatoes leads to an increase of total antioxidant activity and bioaccessible lycopene. A similar finding exists for beta carotene in carrots.
A 2008 study on cooking method (boiling, steaming, or frying) and phytochemical and antioxidant capacity of carrots, broccoli, and courgettes found that boiling and steaming were better than frying at maintaining phytochemical and antioxidant levels.
One study on broccoli found that steaming was more beneficial to maintaining nutrients when compared to microwaving, boiling, or stir-frying.
Conclusion? The best cooking method depends on what nutrient you are hoping to get the most from, and what vegetable you are cooking.
When examined, extended cooking time tends to lead to loss of benefits – so it is likely best to keep cooking time to a shorter duration.
Many compounds become more bioavailable with cooking, so while it is good to add some raw veggies in here and there, overall a short cooking time is preferred.
Overall, steaming is better than boiling as this leads to less loss of water soluble nutrients from the food.
Steam veggies for a short period of time, eat some raw, and make some soups – variety is the best way to get the most from veggies.
Contrary to popular belief – Microwaving does not reduce nutrient value
High Vitamin C, High Vitamin B, Polyphenols and Water soluble are unstable when cooking, so stir fry more than boil/steam, broccoli,
Dry Cooking retains more nutrients for fat soluble vitamins like A, E, D – Spinach, carrots, beets, sweet potatoes, peppers
Contrary to popular belief, microwaving doesn’t kill nutrients in vegetables. In fact, it may outrank steaming when it comes to retaining antioxidants.
A 2009 report in the Journal of Food Science found that compared with boiling, pressure cooking and baking, microwave cooking helped maintain the highest levels of antioxidants in beans, beets, artichoke, asparagus, garlic, onion and spinach. Microwave cooking increased antioxidant activity in eggplant, corn, peppers and Swiss chard. On the other hand, boiling and pressure cooking led to the greatest antioxidant losses.
References
1. Effects of different cooking methods on the antioxidant properties of red pepper
2. Thermal processing enhances the nutritional value of tomatoes by increasing total antioxidant activity
3. Effects of different cooking methods on nutritional physicochemical characteristics of selected vegetables.
4. Effects of different cooking methods on health-promoting compounds of broccoli
/ Before You Get Your Hair Colored…DO THIS!

Your Digestive System and How it Works

Liver Damage from Alcohol Is Not Coming From Alcohol