This Post Was All About Coconut Oil: How to Fight Colds & Flu- Thomas DeLauer. 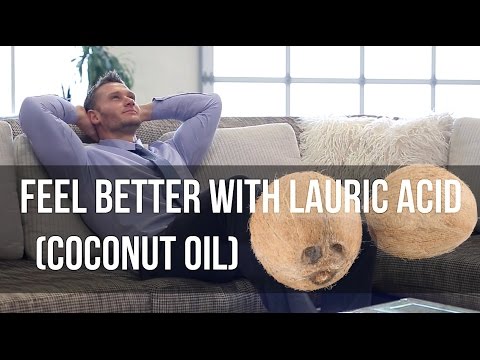 Coconut Oil: How to Fight Colds & Flu- Thomas DeLauer
Cut through the internet health and business nonsense
Coconut oil is the food with the highest quantity of lauric acid, which is the precursor to monolauric acid (monolaurin). Lauric acid is a medium chain fatty acid found in foods containing saturated fats. Lauric acid and monolaurin are known for their antimicrobial properties. Effective against bacterial, viral and fungal infections, and have been shown to boost the immune system. While both are effective antimicrobial agents, monolaurin is known to be the most effective. The human body is capable of converting lauric acid to monolaurin. Monolaurin has been recognized to be an effective antimicrobial agent since 1966.
Bacteria: One study looked at 30 straight-chain fatty acids and their derivatives in regards to how capable they were at killing bacteria. Lauric acid was found to be the most effective of the 9 saturated fatty acids at killing gram-positive organisms. It has been shown in one study to kill Staphylococcus Aureus, an infection that can cause infections that lead to fatality.
Skin health: the antibacterial properties of lauric acid isn’t only good for our internal health, but for our skin’s health too. Inflammatory acne can be attributed to the overgrowth of gram-positive bacteria known as P. acnes. A 2009 study demonstrated that lauric acid was 15 times more effective at inhibiting growth of P. acnes than benzoyl peroxide, which is found in many acne medications. Monolaurin is known to kill bacteria through its interference in signal transduction in cell replication and through causing disintegration of the pathogen’s envelope. A 2007 study published in the Journal of Medicinal Food found that coconut oil was effective against many fungal strains of Candida. Unlike traditional antibiotics, monolaurin has been shown to not have a negative effect on gut bacteria.
Viruses: There is evidence of the benefits of monolaurin and lauric acid on HIV, herpes, measles and many other viruses. One study looked at HIV positive patients and gave them either monolaurin on coconut oil. 8 of the 14 patients showed reduced viral loads following 6 months of either monolaurin or coconut oil supplementation, with 3 showing significant reductions. 2 of these were in the coconut oil group and the other was in the monolaurin group. These findings are still being studied further but show a promising effect of healthy saturated fats against viruses. Many of the viruses that are inactivated by monolaurin are known to be opportunistic infections that may play a part in chronic fatigue syndrome and immune dysfunction syndrome.
Heart Health: Both trans-fats and saturated fats are used in food manufacturing to affect firmness and texture. One study compared two control groups to determine which was more beneficial to the serum lipid profile – one group consumed large quantities of lauric acid from coconut oil and the other group had partially hydrogenated soybean oil, which is high in trans-fatty acids. The group that consumed the coconut oil was found to have a more beneficial lipid profile following the diets. This shows that, in comparison to a high trans-fat diet, a diet high in lauric acid will have heart health benefits.
Traditional Societies: In some traditional societies, coconuts can make up 60% of the daily caloric intake. This would make the amount of lauric acid consumed very high! Their diets are high in saturated fats, yet low in sucrose and cholesterol. These societies are healthier than the US, and notably have low occurrence of vascular disease. There weren’t any health problems found due to the high quantity of coconut saturated fat consumption.
References:
1. Fatty acids and derivatives as antimicrobial agents
2. Equivalence of lauric acid…inhibitors of signal transduction…
3. In vitro antimicrobial properties of coconut oil on Candida species..
4. Consumption of a solid fat rich in lauric acid results in a more favorable serum lipid profile than…
5. Antimicrobial property of lauric acid against P. acnes
6. Cholesterol, coconuts and diet on Polynesian atolls
7. Lauric acid
8. Review of monolaurin and lauric acid
f The Best Way for a VEGAN to Lose Belly Fat

3 Reasons Why You Crave Carbs and Are Not Satisfied

The Importance of the Intestinal Mucosal Barrier

Why Keto is the Best for Menopausal Belly Fat