This Post Was All About Chocolate: Benefits vs. Dangers | Is Theobromine Safe? – Thomas DeLauer. 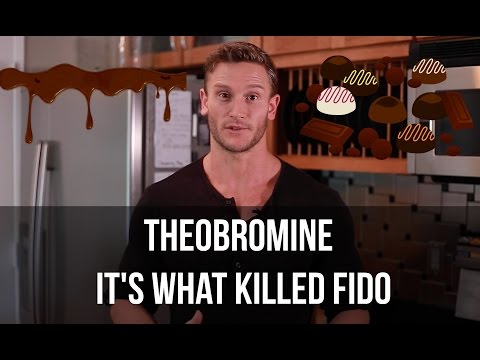 Chocolate: Benefits vs. Dangers | Is Theobromine Safe? – Thomas DeLauer:
Learn the OTHER benefit of Chocolate! I’ll teach you more about the foods that work for you at Click to learn more.
Theobromine and Fat Loss:
Theobromine is the major alkaloid in cocoa, giving cocoa its bitter taste. Theobromine is the substance responsible for chocolate being toxic to dogs and some other mammals. Humans process theobromine differently, leading the many health benefits rather than toxicity. Cocoa consumption began in the Americas and spread to Europe in the 16th century. It was traditionally used both as food and medicine. Theobromine concentrations are higher in dark chocolate than milk chocolate or white chocolate. Cocoa nibs and cocoa powder have the highest concentrations. It is a substance known as a methylxanthine derivative. Caffeine is also a methylxanthine → caffeine and theobromine are similar in molecular structure. Our affinity for chocolate has to do with the combination of caffeine and theobromine.
-A study had participants consume a drink with a capsule of either placebo or a caffeine/theobromine combination similar to that of chocolate. Those that consumed the drink with the caffeine and theobromine reported liking the beverage more. Just like caffeine, theobromine is a stimulant. This is due to their effect on adenosine receptors. These compounds act as adenosine antagonists, taking the place of adenosine on receptors in the brain. Theobromine is about 1/10th as effective as caffeine in the body, so it takes much more theobromine to feel its effects than caffeine. The half-life, the amount of time that it takes for your body to process ½ of a substance, of theobromine is about 6 to 10 hours, longer than that of caffeine. This means that theobromine stays around in the body for a long period of time after consumption. Theobromine is an anti-inflammatory and reduces oxidative stress in the body. It has been found to help with asthma symptoms. Theobromine has been found to increase HDL cholesterol and decrease LDL cholesterol. Theobromine has been found to affect DNA and RNA structure. The full impacts of this are not yet known, but it is hypothesized that this can inhibit or induce gene expression.
-Caffeine has been found to reduce the risk of Alzheimer’s and Parkinson’s disease.
-Thus theobromine may be effective to treat some diseases and could be used in future drugs
Theobromine and Weight Loss: Theobromine may help to speed up weight loss, but not as noticeably as caffeine. As a mild stimulant this can give you the energy to go for a run or hit the gym. As a diuretic, this can help you to empty the contents of your stomach. Also may act to suppress appetite, reducing our likelihood to consume unhealthy foods at moments of temptation. The quantity of theobromine found in chocolate and other foods, such as coffee, are unlikely to be high enough for you to notice any weight loss impact through the above means, especially when compared to caffeine in coffee. However, there are so many other health benefits, and the more all-around healthy you are the more able you are to live an active lifestyle. One of these has to do with insulin resistance. Insulin resistance is the most likely way that theobromine may aid in weight loss.
A 2005 study had volunteers consume dark chocolate for 15 days, and then white chocolate. Insulin sensitivity was increased during the dark chocolate period. Improved insulin sensitivity is crucial in weight loss.
Can You Have too Much?
Studies have found that the positive mood effects of theobromine turn negative when too much is consumed. Dark chocolate has roughly 200 to 300 mg of theobromine per 40 grams, so a typical 50 gram dark chocolate bar can be assumed to be at about 250 to 375 mg of theobromine. One study found 700 mg of theobromine lowered blood pressure, increased how interesting a task seemed and decreased calmness. Another study found that higher levels of theobromine, from 500 mg to 1000 mg, experienced more “dislike” feelings. So, eating one dark chocolate bar will likely lead to positive mood effects, but eating two or more could lead to negative effects.
References:
1. The relevance of theobromine for the beneficial effects of cocoa consumption
2. Short-term administration of dark chocolate…
3. Psychopharmacology of theobromine on health volunteers
/ Top Symptoms of a Zinc Deficiency: MUST WATCH!

Can Chicken Soup Cure Arthritis? MUST WATCH if you have thinning joints!

My Opinion on Bone Broth