This Post Was All About Cable Abs Workout: 3 Steps to Shredded Abs- Thomas DeLauer. 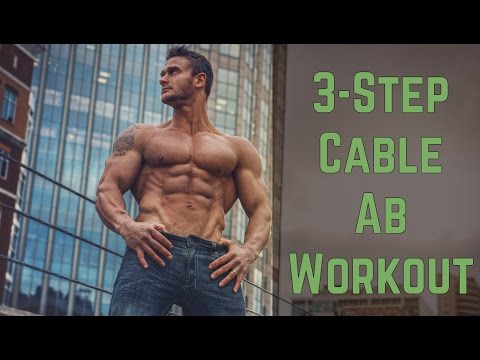 Learn more about how to build a stable core when you’re at the office at
It’s easy for us to lose our stability muscles if we are sitting at desks all day!
This cable abs workout was designed by OptimizeCEO to give you a quick and easy ab workout that you can do in about 10 minutes in ONE location in the gym.
We all know how difficult it can be to find equipment in a busy gym, especially when you just want to get in and get it done. So this simple and effective ab routine focuses on using constant tension from the cable pulley systems to activate portions of the abs that you wouldn’t otherwise really activate well.
You can rotate through as many times as you need, but in this video, we will rotate through three times.
Exercise Number 1:
Rope Ab Crunches:
In the video I explain how to properly perform this exercise to get the most out of it. The goal here is to really stretch at the top of the movement and not to sink the butt back out too far.
Exercise Number 2:
Plank Single Arm Rows:
This exercise is great for building core stability and for bringing in the internal oblique muscles which will help create the illusion of a smaller waist, especially if you’re just starting to get lean enough to see some abs! Be sure to stay in the plank position and slowly row with the one arm. You can modify this exercise from the knees as well.
Exercise Number 3:
Stability Ball Russian Twists
This one can take a little bit of getting used to as it can be a bit wobbly at first. But for the most part, you’re stabilizing using your obliques and of course your transverse abdominus which is the muscle that truly holds in your gut, if you will.
Slowly rotate through this motion being careful not to jerk the cable too much and maintaining control on the sides of the abdominals.
This is a workout that you can get done anywhere with a cable machine and you’ll never have to leave the comfort of that one area. Perfect for the lunch break ab workout or to tack onto a day of cardio for a little extra core burn!
Subscribe to the Thomas DeLauer Channel Here: 1 Memory Loss and the Hippocampus: MUST WATCH!

How to Get Your Wife To Lose Weight: FOR MEN ONLY!

Knee Arthritis and Your Mouth Bacteria

The REAL Cause of Non Alcoholic Fatty Liver Disease (NAFLD)

Is Your Calcium Supplement Killing You?