This Post Was All About Burn Carbs and Lower Blood Sugar with Turmeric- Thomas DeLauer. 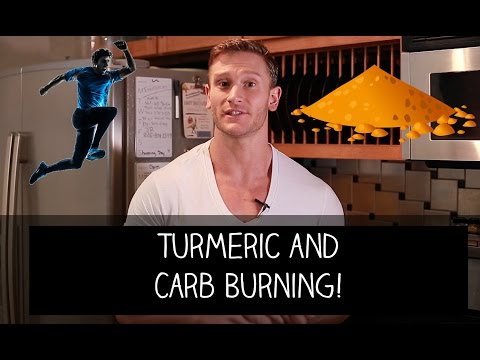 Burn Carbs and Lower Blood Sugar with Turmeric- Thomas DeLauer:
The trick is to know when to utilize specific foods, and in this case, a specific spice. Turmeric has so many properties, but its carb control properties are amazing!
Fat loss is simple – in order to lose fat, you need to learn to control your insulin levels. Your pancreas releases insulin when you eat, and even larger quantities of insulin are released when you have a carb-heavy meal. This happens because carbs are converted to sugars in your blood, and the insulin is needed to control your blood sugar. When you snack consistently and eat a lot of carb heavy foods, your pancreas does not have the time it needs to rebuild insulin for your next meal.
Insulin remains in your blood for about 2-3 hours after a meal, and if you eat lots of carbs your pancreas never has a break from working to produce more insulin. Over time this leads to the pancreas not being able to release sufficient insulin, which can lead to type-2 diabetes.
Glucagon and insulin: glucagon and insulin work together in a balancing act. When blood sugar levels drop, glucagon tells the liver to release stored glucose to maintain blood sugar levels. This is when fatty acids and ketone bodies are released, which equals fat burning. Insulin and glucagon cannot be present at the same time, so if we are consuming lots of carbs and always eating we always have insulin in our blood, and glucagon doesn’t have the chance to kick start fat burning. So, consuming carbs leads to a higher insulin release, hampering fat loss and eventually leading to type-2 diabetes.
What can you do?
Snack less and eat fewer carbs, allowing your insulin levels to drop. You can also add turmeric into your diet. Traditionally used in Chinese medicine Asian cuisine, turmeric has been utilized for many years. Recently the blood sugar lowering effects of turmeric have been found in studies.
A 2008 study published in Molecular Nutrition & Food Research found that both mice with diabetes and those without experienced lower blood glucose levels when curcumin was added to their diets for 6 weeks. When you lower your blood sugar you thus lower your blood insulin levels, allowing glucagon to get your fat burning mode started. Simply add turmeric to your meals to reduce your blood sugar levels and thus the amount of insulin released after your meals. Combine this with eating fewer carbs and you can help to control insulin, allowing for fat loss.
1. Carbohydrates and Blood Sugar
2. Effect of Curcumin Supplementation…
3. Meal frequency
/ Are Carrots Okay to Eat on Keto?

The Best Way to Deal with Varicose Veins!

Is it Safe to be in Ketosis if Pregnant or Breastfeeding?

The MOST Important Vitamins For the Eyes

Full Day Of Eating Ep. 12 | Does Eating Breakfast Start Your Metabolism? | Pumpkin...How To Lose Belly Fat and Get A Six Pack | THE TRUTH – NO BS Scroll to top