This Post Was All About Burn Carbohydrates with Antioxidants: Alpha Lipoic Acid- Thomas DeLauer. 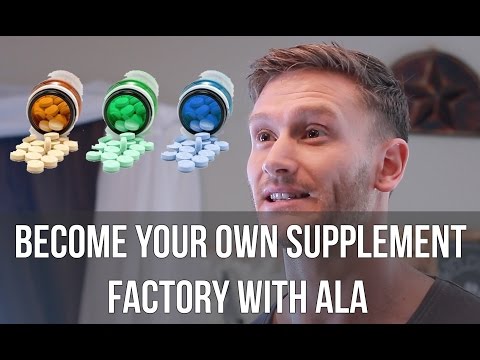 Burn Carbohydrates with Antioxidants: Alpha Lipoic Acid- Thomas DeLauer:
Did you know that the body is capable of producing its own antioxidants? One powerful antioxidant produced by the body is alpha lipoic acid.
Alpha Lipoic Acid is found in every cell of the human body. Both water soluble and fat soluble, so able to act throughout the body. Antioxidants attack free radicals, which are waste products that occur when the body creates energy through the food we eat. Free radicals can also come from exposure to toxins and pollutants. Negative effects of free radicals include: slows metabolism, abnormal cell growth and proliferation, impaired neuron signaling. Free radicals lead to cellular damage, including damage to organs. Make the body more susceptible to infections. Cancer, heart disease and diabetes are partially caused by this kind of cellular damage. How else can ALA help our health?
ALA for Fat Loss and Building Muscle: Multiple studies have found ALA reduces weight gain in rodents and in humans. One study followed obese diabetic patients for 20 weeks with either 600 mg supplementation of ALA per day or a placebo and found significant effect on body mass index and triglyceride levels, decreasing BMI and triglyceride levels, in the subjects with oral ALA supplementation. Protection against insulin resistance has been shown. Insulin resistance leads to decreased glucose uptake in fat and muscle cells.
ALA helps to turn glucose into energy, or fuel, for your body through insulin signaling: When insulin binds to the insulin receptor a cascade of events is started, leading to increased cellular glucose uptake. ALA has been shown to activate this cascade of events, leading to increased glucose uptake in fat and muscle cells. This is done not through an effect on insulin levels, but by triggering the same sequence of events, leading to glucose transport for energy creation. ALA sort of mimics insulin!
Studies have shown that this shuttling allows more glucose to enter skeletal muscle cells, thus more glucose burned as for energy → more energy to tear and rebuild muscles and less shuttled to be stored as fat. When more glucose is delivered to muscle cells, there is less available to be stored as fat in far calls. So you have more fuel to push muscle growth and less glucose stored in fat cells = muscle growth and less fat accumulation.
Other Possible Uses of ALA: ALA is approved in Germany as a treatment for diabetes and for symptoms of diabetes due to its effect on glucose.
Cancer
Memory Loss
Chronic Fatigue Syndrome
HIV/AIDS
Heart Disease
Eye related disorders
How to add Alpha Lipoic Acid to Your Diet: Foods high in ALA: broccoli, spinach, potatoes, red meat, organ meats – liver. You can also take supplements. The bioavailability of supplemental ALA has been shown to be much greater than that of dietary ALA. You can take about 50 mg for antioxidant purposes; up to 800 mg per day for diabetic purposes, as directed by a doctor. 350 mg to 600 mg daily is a common dose. This is often recommended to be taken on an empty stomach.
References:
1. Alpha-lipoic acid
2. Alpha-lipoic acid
3. Stimulation of glucose uptake…
4. Lipoic Acid
5. ALA reduced body weight…
%20798%20D.pdf
6. Lipoic acid increases glucose uptake…
7. Improvement of insulin sensitivity…
8. Effects of ALA on blood lipids…
9. Alpha Lipoic Acid
/

Grocery Shopping 101 | How to Shop Healthy

Keto Over 40: How to Diet Differently

How to Get Rid of Trigger Finger Pain6 Dieting And Weight Loss Tips For Men, Women & Beginners
Scroll to top