This Post Was All About Boost Metabolism and Reduce Pain with Cayenne Pepper!- Thomas DeLauer. 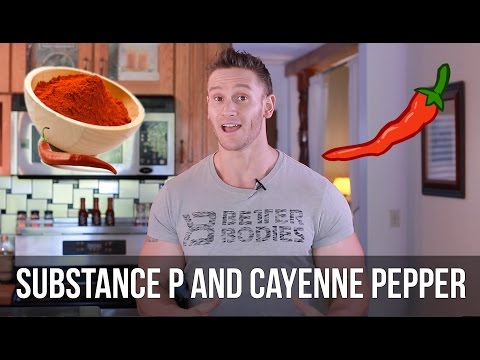 Boost Metabolism and Reduce Pain with Cayenne Pepper!- Thomas DeLauer
It’s time for some real answers to why cayenne pepper can help you burn some fat!
Cayenne Pepper and Substance-P Effects on Inflammation and Brain:
1. For the past 9,000 years, Native Americans have employed cayenne pepper as both a food and medicine
2. Cayenne pepper has powerful pain-relieving properties when applied topically
3. The active ingredient in cayenne pepper is capsaicin
4. Capsaicin stimulates nerve endings so they release a receptor chemical, substance P, that transmits pain signals to the brain
5. When a nerve ending has released all of its substance P reserves, pain signals are no longer sent to the brain until substance P has been replenished
6. The result is pain relief for chronic conditions such as: arthritis, bursitis, psoriasis, shingles, joint and muscle pain, post-surgery pain, pain due to nerve damage caused by diabetic neuropathy, and low back pain.
7. Capsaicin as a natural pain reliever does not pose the risks associated with common NSAIDs and other pain-relieving drugs
8. Apply capsaicin in small doses and do not overuse
9. Cautions: avoid getting capsaicin in or near the eyes, nose or open wounds. Do not use capsaicin with a hot pad or immediately before or after a hot shower.
10. “In one study, a man with persistent pain due to wounds from a bomb explosion experienced an 80 percent reduction in pain symptoms after using a capsaicin (8 percent, known as high concentration) patch.”
11. Capsaicin is like the laser technology of herbs. Just as a laser can either cut through steel or perform the most delicate eye surgery, so this fiery pepper can either inflict pain or relieve it. As capsaicin interacts with nerve endings, initially it produces pain, but quickly depletes the substance P, so that the brain no longer receives the message of pain. The result is pain relief.
So whether you’re dealing with joint and muscle pain after a hard workout at the gym, or agonizing over the pain of arthritis, a medical procedure, or even shingles, capsaicin applied as a cream or a patch can offer you relief.
Taken internally, capsaicin can: improve circulation, boost your immune system, aid your digestive process, treat migraines, and even provide relief from ulcers. Interestingly, however, studies have shown that capsaicin is more effective when eaten as opposed to swallowed as a capsule. The fiery sensation in the mouth appears to be an important precursor to the pain relief you can expect as this wonder herb travels through your intestinal tract and bloodstream.
Subscribe to the Thomas DeLauer Channel Here: 1 Can Dairy Affect Your Hormones?