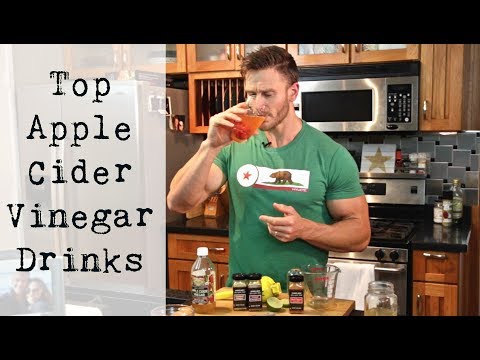 1. Combine all ingredients in a glass and stir to combine

ACV: previously mentioned
Kombucha:
Contains healthy bacteria, with probiotic properties
Strong in acids and enzymes, which aid in digestion
Also contains benefit of whatever kind of tea is used to make kombucha
Frequently black tea, but any kind of tea can be used
Caffeine can help with concentration and energy, and tea leaves boast many health benefits
High in antioxidants due to tea

1. Put berries in bottom of a cup and add sweetener, if using. Muddle the berries (you can do this with a muddler or simply with the back of a spoon)
2. Add in ACV and lemon juice. Fill up the cup with water and ice. Stir to mix.

Another thing apple cider vinegar provides is detoxification of your lymphatic system, which then helps optimize homeostatic function in your body. This may be as a result of the antioxidants in ACV reducing oxidative damage by free radicals, while improving both your blood and organs.
The Truth About Cancer says:
“Cider vinegar was recently determined to be a strong antimicrobial agent and alternative to toxic and expensive chemical disinfectants. One of the most fatal bacterium, Mycobacterium tuberculosis, is resistant to disinfectants but is found to be killed by acetic acid.
Especially in patients who are immunosuppressed, apple cider vinegar is an excellent natural antimicrobial tonic to rid of harmful bacteria and provide immune support.”8

Acetic acid is the formal, chemical name for the component in vinegar that gives it the characteristically sour taste and health benefits.
Acetic acid is a compound that gives a sour taste to vinegar as well as pickles and sourdough bread.
The Popular Science website tells us acetic acid is formed by the fermentation of ethanol (the scientific name for pure alcohol)

Maximize the Anti-Cancer Effects of Garlic

The Sleep Remedy That May Double Your Fat Burning