You are here: Home1 / All Articles2 / Keto Course3 / The Inflammation Factor in Common Diseases

The Inflammation Factor in Common Diseases

More specifically, you want help with The Inflammation Factor in Common Diseases?

This Post Was All About The Inflammation Factor in Common Diseases. 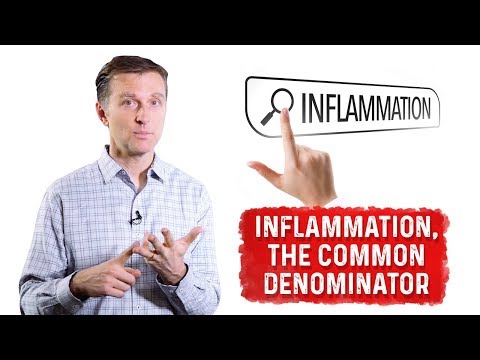 In this video, Dr. Berg talks about the common healthcare problems.

Heart Disease
• The blood vessel starts developing plaque that build up with cholesterol, LDL (Low Density Lipoprotein), calcium. There’s a huge focus on cholesterol but doesn’t have any problem with protein or calcium even though calcium makes up this plaque. Before the plaque develops, there’s always something that causes it and that is usually an inflammation and damage in the artery wall of the heart from infection, free iron, oxidant, high sugar, etc.
• Coronary Artery Calcium Test – The best test for heart health and is way more accurate in detecting heat disease by testing the calcification.

• Amyloid Plaquing – It is a type of protein that comes from a damage to the brain, infection, inflammation, chemicals and oxidation. The body is trying to heal, protect or patch something up.

Autoimmune Disease
• The body is developing antibodies. The body’s own immune system is attacking its own organs and glands and there’s inflammation as a result from the immune war that creates a collateral damage.
• There’s always a stress event that occurs right before a person develops autoimmune disease.

Hey guys today we’re going to talk about the common threads between the real big healthcare problems out there. Heart disease, cancer, alzheimer’s, autoimmune diseases, I’ve talked a lot about diabetes, we’ll touch on that a little bit and there’s other ones but these are the main ones. Let’s first talk about heart disease, what happens in the blood vessel of someone with heart disease is they start developing plaque and the plaque is built up with cholesterol and the person usually has a high LDL and that’s called bad cholesterol supposedly bad cholesterol. But in reality LDL is low-density lipoprotein. It has cholesterol in it but this is a protein and there’s this huge focus on cholesterol but not any problem with protein. If we take a look at a plaques, it’s composed of cholesterol, calcium and proteins. But people don’t say to avoid protein and they don’t tell you to avoid calcium either, right? Even though calcium makes up this plaque, they really target this thing called cholesterol. Now, the thing you need to know is before this piece of plaque develops there’s always something that starts it. And it’s usually some inflammatory situation going on, there’s some type of damage in wall of the artery in the heart and then it starts to build up and one of the best test to do for the heart is called a coronary artery calcium test. Coronary artery calcium test is way more accurate in detecting heart disease than LDL or cholesterol.

Is Keto (Low Carb) Really Safe for the Thyroid?

Hydroxychloroquine: What Does the Research Really Say