You are here: Home1 / All Articles2 / Keto Course3 / The Hidden Source of Cancer, Fibroids & Tumors

More specifically, you want help with The Hidden Source of Cancer, Fibroids & Tumors?

hey dr. Berg here in this video we’re going to talk about a something very interesting that was just released in a new research study it had to do with something called an endocrine disruptor I have to define that word first it’s endocrine disruptors are anything in the environment that is like a chemical that mimics or disrupts the endocrine system in an acts like estrogen which is very cancerous that would be like pesticides insecticides herbicides fungicides and those chemicals have a tendency to create fibroids cysts on your ovaries cancer and sex organ problems like infertility okay so this little message I want to talk about is a chemical called glyphosate and glyphosate is the active ingredient in roundup that weed killer that Monsanto of sells so you might say well I don’t use roundup in my yard yeah but it’s used and all the genetically modified foods because one of the purpose of making genetically modified foods was to make them resistant against Monsanto’s Roundup Ready wheat killer so they can then spray these on their genetically modified foods which would be like the most the soy in the US the corn the canola and the wheat so these are the big ones but there’s a lot of other ones or even making cows genetically modified to produce more milk so you and unfortunately in the u.s. they passed laws there to hide this labeling so you don’t really know if you are getting genetically modified or not I’ll show you how to figure that out but generally it’s hard to find out if you’re having GMO or non-gmo now what’s the significance of this one chemical well they found out that it will trigger breast cancer in parts per trillion not per billion parts per trillion that is a very small small amount so just to give you a comparison how small that is let’s let’s visualize it let’s take 600 train cars okay a fluid of water and let’s say we took these train cars and we dumped him into a huge bucket gigantic bucket and then we took one drop of this chemical and put it into that huge bucket and we mix it up and that would be this mixture this dilution of one part of this chemical to parts per trillion alright so then if you took one drop of that that would have enough potential effects to cause cancer yeah incredible so in other words it doesn’t take much of this chemical to create a huge problem in our bodies so I’m going to recommend that you really start reading and watching out for the GMO foods because try to find a food that doesn’t have soy corn canola and wheat most processed foods have these and then the soy has an additional estrogenic effect on top of that because it’s estrogenic as a food there’s certain it’s like a certain plant-based chemicals that trigger that so it’s very very potentially damaging to your body so this is how you find it you look on the sticker on that fruit or vegetable and if it’s genetically modified it’s going to have five digits starting with an eighth if it’s organic it’ll have five five digits starting with a nine if it has four digits it’s conventional which means it’s more like pesos it already has pesticides on it but it’s not GMO okay so that’s how you determine if something is differentiate between the three right there I listed down below the link to the study and this little thing right here and some more information and so definitely spread this video out to your friends and family because this is a situation especially the amount of women that are getting fibroids and breast cancer it’s crazy and you know it’s like don’t wait for them to do something because they’re not doing something that are politically strong and I don’t think they’re going away anytime soon alright so I’ll see you on the next video you

This Post Was All About The Hidden Source of Cancer, Fibroids & Tumors. 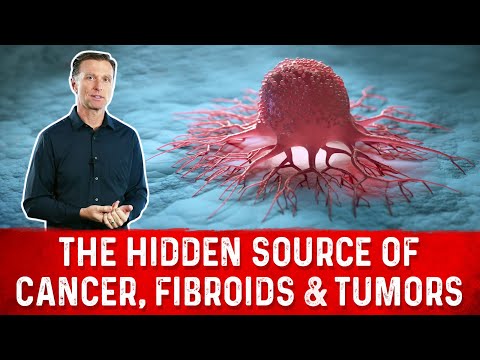 Dr. Berg discusses a recent study in the news about the source of fibroid and tumors due to endocrine disruptors. In this video, Dr. Berg also explains what this means to you and your eating habits. Are you eating the right types of food or are you feeding your body chemicals that will is causing the main problems in your health? Find out in the video.