You are here: Home1 / All Articles2 / Keto Course3 / The 5 WORST Breakfast Ingredients for Your Health (and Weight)
http://www.nature.com/articles/srep09589

The 5 WORST Breakfast Ingredients for Your Health (and Weight)

More specifically, you want help with The 5 WORST Breakfast Ingredients for Your Health (and Weight)?

This Post Was All About The 5 WORST Breakfast Ingredients for Your Health (and Weight). 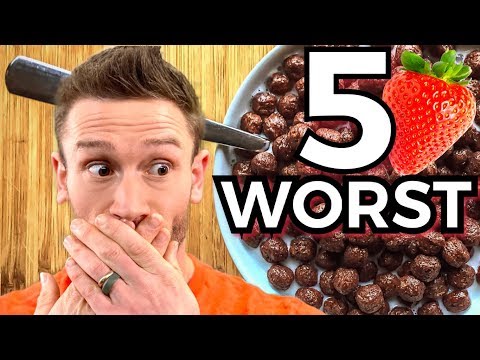 I Recommend Magic Spoon, in my opinion it tastes better than sugary cereal:
Code: THOMASDELAUER Gets You Free Shipping

Fructose is included in a lot of breakfast cereals/foods, and while every cell in the body, including the brain, can use glucose, fructose is metabolized much differently – the liver is the only organ that can metabolize fructose

Fructose converts to activated glycerol (g-3-p), which is used to turn FFAs into triglycerides – the more g-3-p you have, the more fat you store (fructose is a lipophilic carb)

Fructose has no effect on ghrelin (glucose, for example, can suppress ghrelin → suppresses appetite) and interferes with your brain’s communication with leptin, resulting in overeating

“Fuel accumulation” genes, such as those involved in cholesterol biosynthesis (HMGCR, HMGSC1), LDL receptor (LDLR), and glucose transport (GLUTS 1, 3, 5 and 14) have low levels in the morning and rise in the afternoon (negatively, correlated with PER1 mRNA.)

A 2009 study (Gastroenterology) took frozen sera from 1948 to 1954, tested it for antibodies to gluten, and compared these results with a test sample of similar people today

By triggering the production of the protein zonulin, gluten causes the tight junctions in the gut to open. Gluten proteins then leak into the blood stream. Your body responds by making antibodies against these proteins, which have the potential to cross react with thyroid tissue.

It can spike your blood sugar levels very fast.

Elevated blood sugar leads to rebound hunger that causes you to eat more at the next meal, which can make you gain weight

A study from PNAS found that in regards to the body’s circadian rhythm, human glucose tolerance is reduced during the evening hours, even when “day” and “night” times are experimentally reversed.

Found that glucose levels after identical meals were 17% higher (indicating lower glucose tolerance) in the evening than in the morning, independent of when a participant had slept or had their meals

While some data support SCF as a prebiotic, studies on maltodextrin contradict that – maltodextrin may suppress the proliferation of beneficial bacteria like bifidobacteria (per PLoS One:

Another study, also from PLOS One Medical Journal, published research showing that soluble corn fiber increases the survival of Salmonella bacteria, which can cause gastroenteritis and a broad range of chronic inflammatory conditions.

Worried About Insulin Resistance? THESE 4 Supplements are Shown to Improve it