You are here: Home1 / All Articles2 / Keto Course3 / The 5 Biggest Ketosis Mistakes

More specifically, you want help with The 5 Biggest Ketosis Mistakes?

This Post Was All About The 5 Biggest Ketosis Mistakes. 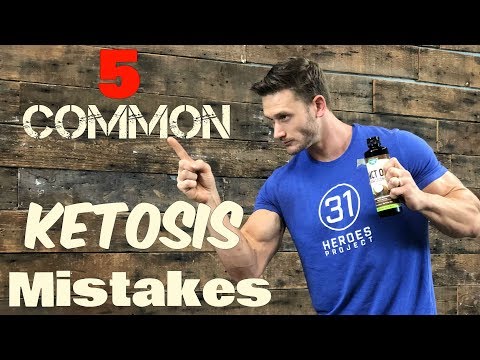 http://KettleandFire.com/Thomas For 20% Off Your Bone Broth!

OR USE COUPON CODE: THOMAS20

By sufficiently restricting carbs (and protein) you’ll enter a state of ketosis, so even if you’re fat intake is lower than it should be, you’ll likely maintain a ketogenic state

A common problem people have is that their ratio between fats, carbs, and protein is off, causing them to feel sluggish and lethargic – creates an unsustainable way of eating/living.
• Realistically, it should be 90-8-2

Blood ketone meters test for BHB in the blood and are one of the more accurate, albeit, expensive ways to test for ketones

They are easy to use and very cheap; the only downside is that after a while, once you have become keto-adapted, your body becomes efficient at using acetoacetate and you will have a lower reading of ketone levels on the strip

The best, yet most costly, way of testing for ketones is via a breath meter – acetate is excreted through the breath and has been found to correlate very closely to levels of BHB in the blood

It is the most expensive way to test for ketosis, but breath meters are a one-time purchase and are reusable

As a result, health issues arise due to inflammation that is associated with metabolic endotoxemia (endotoxemia – presence of endotoxins in the blood)

– this type of bacteria contains lipopolysaccharides (LPS), also known as endotoxins, within their cell wall

When LPS enters a person’s bloodstream, usually due to a leaky gut, it causes low-grade inflammation as your body’s immune system tries to get rid of the endotoxins

Your microbiome always has a certain amount of gram-negative bacteria, but when pathogenic bacteria outweighs the number of commensal bacteria inflammation arises (1)

Certain bacteria prefer to consume protein, sugars, or carbs, while some prefer fats and fat is most commonly correlated with an increase in the bacteria that produce endotoxins

A study published in the journal Diabetes, from the American Diabetes Association, found that consuming a high-fat diet (roughly 72% fat) for 4 weeks resulted in 2-3x higher levels of plasma LPS concentrations – due to an increase in LPS-containing bacteria (2)

Broth is made by boiling bones (beef, chicken, fish, etc) in water with an acid (like vinegar) and optional spices, vegetables and herbs. Broth can boil for as little as 4 hours or up to 48

Carbs hold a lot of water, so when in a ketogenic state – especially in the beginning – your body burns through the stored glucose in your liver and muscles, so you’ll be releasing a lot of water

Plus, your kidneys will start excreting excess sodium as the levels of your circulating insulin drop – Fat oxidation is at its greatest when your insulin levels are low

Additionally, drinking more water will encourage the breakdown of more fat as the ketones that are expelled in your urine are replaced with new ones produced as fat is being burned up

Sodium, magnesium and potassium are excreted in high amounts on low-carb diets and many keto dieters fail to supplement them

1) What You Need to Know About a High-Fat Diet | HuffPost. (n.d.). Retrieved from

Dark Circles Under the Eyes

How Long Does Magnesium Stay in the Body?

How Much Salt On Keto Diet? | Dr.Berg Answers Scroll to top