You are here: Home1 / All Articles2 / Keto Course3 / Text Neck: Lower Back Pain & Fat Gain from Cellphone Use- Thomas ...

This Post Was All About Text Neck: Lower Back Pain & Fat Gain from Cellphone Use- Thomas DeLauer. 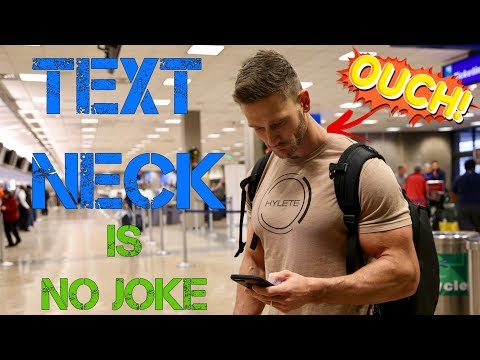 Text Neck:
Lower Back Pain & Fat Gain from Cellphone Use- Thomas DeLauer…The human head weighs about 12lbs, but as the neck bends forward and down, the weight on the cervical spine begins to increase. At a 15-degree angle, this weight is about 27 pounds, at 30 degrees it’s 40 pounds, at 45 degrees it’s 49 pounds, and at 60 degrees it’s 60 pounds. 64% of American adults use smartphones and smartphone users – according to research from the National Library of Medicine spend an average of up to 4 hours per day hunched over, reading emails, sending texts, etc. – equates to about 1,400 hours per year that people are putting stress on their spines (1)

Posture:
Text neck places a great deal of stress on the entire posterior aspect of the C-spine. The anterior aspect of the spine is compressed, adding pressure on the intervertebral disc – this increased pressure inside the disc can lead to pain and/or damage to the annular wall. The “hunched” posture puts the scapulae (shoulder blades) in a position that places the scapulae stabilizing muscles on a prolonged stretch and eventually weakens them (2)

Arhritis:
With weakened, stretched out and loose ligaments, the vertebrae move more than normal, putting more pressure on the discs between the vertebrae. Sometimes they move out of normal position. This is called subluxation. This process leads to degeneration of the discs as well as degeneration where the different vertebrae meet, called the facet joint. Text neck with this forward head posture accelerates the aging and degeneration of the intervertebral joints, resulting in degenerative joint disease of the cervical spine. (3)

“Creep”:
When spinal tissues are exposed to continued compression or stress, they deform and go through a transformation that can become permanent. This process is called “creep” – a medical condition that results from the elongation of the ligaments that hold our bones together due to long-term tension upon them: This can be caused by various types of bad posture, including the forward head posture involved in text neck – if this goes on for too long, the ligaments will stretch to the point of no return.
In our neck, we have seven vertebrae that are held together by ligaments. Text neck causes these ligaments to get too loose, to the point where they can no longer hold these seven vertebrae together. The bones shift and can pinch other nearby structures causing some of the symptoms of text neck. Since the ligaments aren’t able to hold the bones together, the muscles will try to this job (3)

Additional:
Research has shown that it can reduce lung capacity by as much as 30% and sitting in a slumped position restricts your lungs’ ability to expand, impairing your lung capacity. Inhaling less oxygen means your heart needs to pump harder to distribute more oxygen-carrying blood through your body (1,4)

Solutions: Simple Alterations-
Adjust your monitor, desk and chair height so that your head is in a neutral position with your monitor at eye-level. Take frequent breaks from position to give your posture a rest.

Chin Tucks- Chin tucks strengthen the neck muscles and help you pull your head back into alignment.

Shoulder Blade Pinches- Shoulder blade pinches help to strengthen the muscles of the upper back, which tend to get lengthened and weakened when slouched.

Foam Roll- Foam rolling (can also be referred to as a cervical roll) releases tension through your mid – to upper back (5,6)

1) ‘Text neck’ is becoming an ‘epidemic’ and could wreck your spine. Retrieved from

Will Bulletproof Coffee Break My Fast?

Why Most Dieters ONLY Lose Water Weight Scroll to top