This Post Was All About Sugar Substitutes: Aspartame vs. Splenda- Thomas DeLauer. 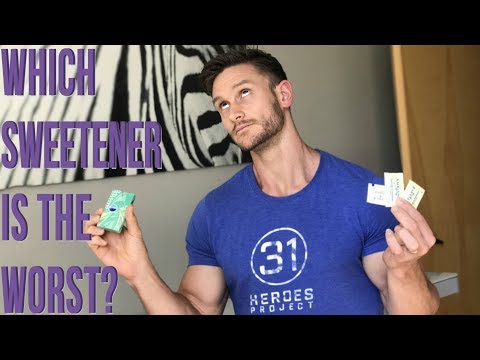 Aspartame (NutraSweet, Equal) FDA approved in 1981 but has been connected to numerous health concerns.
Phenylalanine:
Phenylalanine is an amino acid normally found in the brain. People who have eaten large amounts of aspartame over a long period of time and do not have PKU have been shown to have excessive levels of phenylalanine in the blood. Excessive levels in the brain can cause the levels of serotonin in the brain to decrease, leading to depression –phenylalanine levels of the blood increase significantly in human subjects who chronically consume aspartame.
Aspartic Acid:
Aspartame in diet sodas, or aspartame in other liquid form are absorbed more quickly and have been shown to spike plasma levels of aspartic acid. Too much aspartic acid in the brain kills certain neurons by allowing the influx of too much calcium into the cells. This influx triggers excessive amounts of free radicals, which kill the cells. The neural cell damage that can be caused by excessive aspartate and glutamate is why they are referred to as “excitotoxins.”
Methanol:
Methanol breaks down into formaldehyde in the body, which is a deadly neurotoxin. Formaldehyde is a known carcinogen, causes retinal damage, interferes with DNA replication and causes birth defects. (1,2)
Sucralose (Splenda):
A study published in the Journal of Toxicology and Environmental Health found that sucralose reduces the amount of good bacteria in your intestines by 50 percent. Additionally, studies have found that sucralose seems to peak plasma glucose levels and increase insulin secretion by the pancreas (3,4)
Saccharin (Sweet N’ Low):
One 2014 study found that saccharin may increase glucose intolerance. Increased glucose intolerance can result in a prediabetic condition known as hyperglycemia. Another study, from the Journal of Food and Chemical Toxicology, concluded that saccharin negatively impacts gut bacteria and promotes liver inflammation. Found that saccharin elevated expression of pro-inflammatory iNOS and TNF-α in liver and indicated that it induced inflammation (5,6)
Alternatives:
Whilst Aspartame seems to have slightly more negative side effects, none of the 3 should really be consumed.
Stevia:
Steviol glycosides are poorly absorbed in the body and pass through the upper gastrointestinal tract fully intact. Once steviol glycosides reach the colon, gut bacteria convert steviol glycosides into steviol. Steviol is then metabolized by the liver before being excreted in the urine. Stevia plant has many sterols and antioxidant compounds including kaempferol, which has been found to reduce the risk of pancreatic cancer by 23 percent. (7)
Monk Fruit:
The very compounds that give it a sweet flavor (called mogrosides) are actually antioxidants.
Mogrosides may be able to protect tissues in the body from the damage of free radicals – perfectly contrasts the inflammatory response that is caused by sugar consumption. One study found that this antioxidant effect was able to provide protection for the insulin-secreting cells of the pancreas and therefore improve insulin response. Extracts from the fruit and leaves have been shown to inhibit candida, streptococcus, and bacteria responsible for gum disease in the mouth (8)