You are here: Home1 / All Articles2 / Keto Course3 / Stop Buying Expensive Mayo: Here’s how to Make it CHEAP

More specifically, you want help with Stop Buying Expensive Mayo: Here’s how to Make it CHEAP?

This Post Was All About Stop Buying Expensive Mayo: Here’s how to Make it CHEAP. 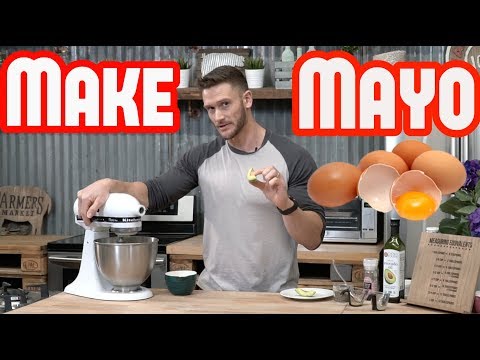 GET TO for the top notch performance apparel I am always wearing!

Commercial mayonnaise is most often made with soybean oil, corn oil or other vegetable oil blends that are high in omega-6’s

Commercial mayo also contains a lot of artificial ingredients and additives like and MSG – while commercially produced mayo can can keep for months in the fridge, homemade mayo can keep for a week

Contains Vitamin E from the eggs and avocado oil

Acetylcholine prompts synaptogenesis, the healthy growth of synapses throughout the brain, which enhances memory encoding, and facilitates the action of all other neurotransmitters as they communicate messages
These communication-friendly conditions are known as “neuroplasticity” and neuroplasticity is correlated with learning and memory

In fact, selenium is what gives the enzyme its potency in preventing and cleaning up after destructive oxygen free radicals – as such, decreased selenium in the blood leads to decreased glutathione peroxidase activity

When a T cell is exposed to a foreign pathogen, it extends a signaling device (vitamin D receptor) with which it searches for vitamin D
This means that the T cell must have vitamin D or activation of the cell will cease
Avocado Oil – 520 degrees F smoke point

Means that pectin benefits the body’s detoxifying capabilities, helps regulate the body’s use of sugars and cholesterol, and improves gut and digestive health

The 4 Electrolytes and their Symptoms When Losing Weight

The 7 Reasons Why You Get Up During the Night

What Does the Color of Urine Tell You About Your Body? Scroll to top