This Post Was All About Secretly High Sugar Veggies (Fructose). 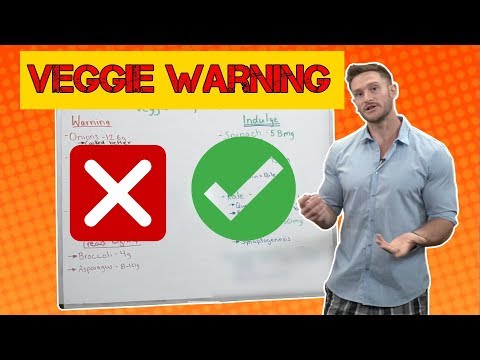 Veggies highest in Fructose (based on 200 calorie serving)

The Lowest (greater than 75mg per 200 calories)

Chlorophyll is literally the blood of plants – its chemical structure resembles that of hemin, which combines with protein to form hemoglobin in the human bloodstream

For this reason, chlorophyll has proven beneficial to increase the red blood cell count in humans – red blood cells carry oxygen to the tissues

Since chlorophyll aids in restoring and replenishing red blood cells at molecular and cellular level, it has the ability to regenerate our body.

The fermentation by the microbiota in the gut of prebiotic fiber, such as inulin, results in the production of short-chain fatty acids, such as propionate and butyrate

In turn, bile salts play a role in intestinal homeostasis by controlling the size and the composition of the intestinal microbiota

Quercetin is the “master flavonoid”, a strong antioxidant and one of the best natural antihistamines

Main benefit of kaempferol is that it’s a potent inflammatory suppressant – it has been found to reduce serum interleukin-6 levels, and be a disruptor of TNF – TNF promotes activation of IL-8

Acetylcholine prompts synaptogenesis, the healthy growth of synapses throughout the brain, which enhances memory encoding, and facilitates the action of all other neurotransmitters as they communicate messages

Reduce serum interleukin-6 levels, and be a disruptor of TNF – TNF promotes activation of IL-8

Sulforaphane (SFN) is an isothiocyanate, a sulfur-containing organic compound that’s an indirect antioxidant – it boosts the antioxidant capacity of cells

7 Keto Breakfast Foods to Try Instead of Eggs