This Post Was All About Reduce Inflammation with 5 Foods! Natural Anti-Inflammatories- Thomas DeLauer. 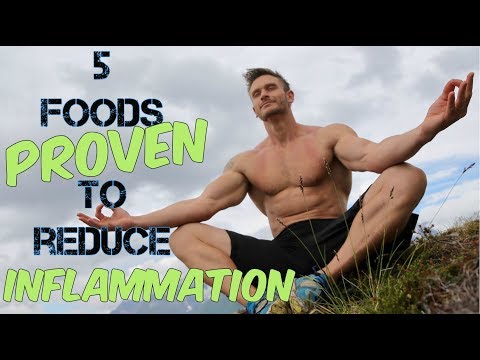 Beets:
Beets contain betanin and vulgaxanthin, two phytonutrients that reduce inflammation by inhibiting COX enzymes that are known to trigger inflammation. If you’ve ever taken aspirin, aspirin is an anti-inflammatory because it inhibits this same COX enzyme. Beets are also a fairly unique source of a nutrient called betaine, which helps to protect the cells from environmental stress and is known to have significant anti-inflammatory effects. According to researchers, betaine consumption is linked to reduced inflammation and protection against other diseases. In general, beets fight to repair the cell damage caused by inflammation and contain high-levels of magnesium, and a magnesium deficiency is strongly linked with inflammatory conditions.

Pineapple:
Pineapples are loaded with nutrients that offer a wide range of health benefits, but they also contain an enzyme known as bromelain. Bromelain has a powerful anti-inflammatory effect on the body and is the reason why pineapple has been touted as one of the best natural anti-inflammatory foods out there. Research has found that due to bromelain’s anti-inflammatory nature, it is effective in treating conditions such as rheumatoid arthritis, inflammatory bowel disease, and joint pain. It is also able to break down fibrin, a protein that causes blood clots.

Garlic:
As mentioned previously, cytokine production promotes inflammation and garlic, favorably, contains four sulfuric compounds that exhibit anti-inflammatory action. A 2012 study found that these four compounds are able to inhibit the production of prostaglandins, cytokines and interleukin – all of which promote inflammation. Garlic also possesses amazing antioxidant properties in the form of allyl cysteine and allyldisulphide. These antioxidants inhibit lipid peroxidation (the oxidation or “turning bad” of fats) and free radicals, which prevents oxidative damage caused by free radicals in joints (7)

Ginger:
Ginger contains a particularly potent anti-inflammatory compound called gingerols. Gingerols are the reason why so many sufferers of osteoarthritis or rheumatoid arthritis experience reduced pain levels when they consume ginger regularly. One compared the effects of ginger extract to a placebo in 247 patients with osteoarthritis (OA) of the knee. The ginger reduced pain and stiffness in knee joints by 40 percent over the placebo! Ginger also contains a compound, known as 6-Shogaol, that inhibits the release of swelling-causing chemicals known to cause damage to neurons. (8,9,10)

Turmeric:
Traditionally used in Chinese and Indian Ayurvedic medicine to treat arthritis turmeric/curcumin blocks inflammatory cytokines and enzymes, including cyclooxygenase-2 (COX-2), which reduces inflammation. A 2010 clinical trial found that a turmeric supplement with 75 percent curcumin provided long-term improvement in pain and function in 100 patients with knee Osteoarthritis! In a small 2012 pilot study, curcumin was shown to reduce joint pain and swelling in patients with active Rheumatoid Arthritis better than diclofenac, a nonsteroidal anti-inflammatory drug (NSAID).

2) Is Pineapple Good For Inflammation? (n.d.). Retrieved from

6) Why Omega-3 Oils Help at the Cellular Level. (n.d.). Retrieved from

9) Health Benefits of Ginger for Arthritis – Living With Arthritis. (n.d.). Retrieved from

Dr. Berg Scheduled to Do the Dr. Oz Show…Then THIS Happens! MUST WATCH

How to Relieve Peripheral Neuropathy Scroll to top