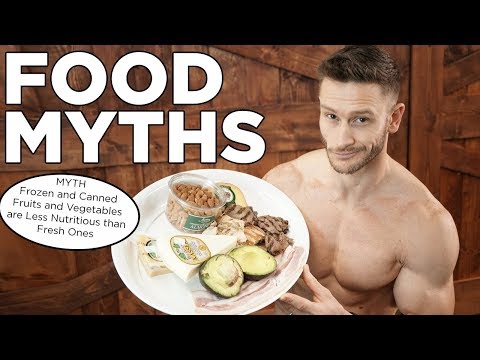 Click Here to Subscribe:
Get My Special Fan Discount on Grass Finished Meat Delivered Directly to Your Doorstep Here:

Popular Food Myths Debunked: Thanksgiving Food Coma- Thomas DeLauer…
Tryptophan:
So the myth is that turkey has a lot of a chemical known as tryptophan – it’s an amino acid that is a precursor for the brain chemicals serotonin and melatonin

But there is no more tryptophan in turkey than in other common meats like chicken and beef – other foods, including nuts and cheeses, contain more

The Truth:
That’s actually not true, the reason why we tend to be tired after we have a large meal at Thanksgiving is simply because of the amount of food that we’re having we have what’s called postprandial fatigue (postprandial somnolence), which is basically after you’ve had a big meal your body goes into shutdown mode and sleep gets promoted

Reasons for Postprandial Fatigue:
Thanksgiving meals are typically heavy in carbs, which help transport tryptophan across the blood brain barrier – so tryptophan could play a role in that sense, but the main reason is largely due to blood sugar spikes

Carbs & Insulin:
Simple carbs, such as cane sugar and high-fructose corn syrup, cause your blood sugar to spike up more rapidly than slower-moving complex carbohydrates, prevalent in starchy vegetables and whole grains

The rapid spike from eating simple carbs, particularly in excess or without other foods, can cause your blood sugar to plummet back down, leading to that groggy crashing feeling

And with Thanksgiving, the larger the meal, and the more carbs and proteins it contains, the higher the blood sugar spikes – more insulin is produced as a result

This, however, is not limited to sugar – many of these insulin receptors are in the hypothalamus, a region of the brain controlling various aspects of the nervous and endocrine systems

Orexin:
Orexin, a neurotransmitter produced by specialized neurons, is believed to be a stimulant that promotes wakefulness

As it happens, orexin neurons in the hypothalamus are inhibited by insulin – the bigger the meal, the more glucose there is in the blood, more insulin is produced, which reduces the production of orexin, and lethargy ensues

At the same time, insulin also exerts positive control over sleep in the hypothalamus by stimulating production of the Melanin Concentrating Hormone (MCH)

MCH, like orexin, also helps to regulate sleep and wakefulness, but unlike orexin, MCH promotes sleepiness

In sum, a large meal induces sleepiness from two directions, by stimulating processes that encourage sleep (MCH) and reducing those that encourage wakefulness (orexin)

Additional:
Sleepiness after a Thanksgiving meal can also be down to our body’s circadian rhythm

It has to do with a dip in your core body temperature – right before you go to sleep at night, your core temperature begins to drop, which is a signal to the brain to release melatonin

2) The Science Behind The ‘Food Coma? (n.d.). Retrieved from

6) Wells AS , et al. (n.d.). Influences of fat and carbohydrate on postprandial sleepiness, mood, and hormones. – PubMed – NCBI. Retrieved from 7

Why is Vitamin A Named Retinol?

How to do Intermittent Fasting: Complete Guide Scroll to top