You are here: Home1 / All Articles2 / Keto Course3 / Plants Do Not Like to be Eaten: Thus the Anti-Nutrients

Plants Do Not Like to be Eaten: Thus the Anti-Nutrients

More specifically, you want help with Plants Do Not Like to be Eaten: Thus the Anti-Nutrients? 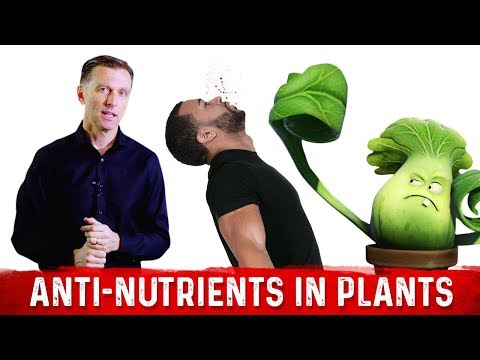 In this video, Dr. Berg talks about anti-nutrients in vegetables and other foods. Plants naturally develop certain defense mechanism to help them survive for a long time and to prevent insects and other predators from consuming them.
Phytoestrogens
• Certain plants like flax and soy have these chemical compounds that could create a little birth control effect in insects.

Phytic Acid
• It is another anti-nutrient chemical which prevents the absorption of many minerals including zinc, iron, calcium, etc.
• It is in seeds and nuts (in the bran part).
• It has the property of being a chelator – which binds with certain chemicals specifically iron.
• IP6:

Lectins
• These are certain proteins in plants that are used as a protective mechanism because they break down certain parts of the digestive tract and put holes in the gut lining which creates a leaky gut.
• They are in nights shades, white potato, soy, brown rice, grains
• Avoid lectins if you have an autoimmune condition.

Oxalates
• These are chemical compounds which our body also makes that can bind with calcium and create crystals which create a lot of problem with kidney stones and even inflammation, arthritis and could accumulate in different parts of the body.

Saponins
• It is a detergent-like that will dissolve a cell membrane
• It is another protective mechanism in certain plants – in nightshades, legumes, amaranth, and buckwheat.

How to do Intermittent Fasting: Complete Guide

Eat These 6 Foods HIGH in Magnesium (You Probably Need it)

Can Ascites Be Fixed?

Eat this Fat NOT that Fat: Comparing Different Fats Scroll to top