You are here: Home1 / All Articles2 / Keto and Fasting3 / NO CARB Cloud Bread Recipe | How To Make Cloud Bread For Keto and Low Carb...

More specifically, you want help with NO CARB Cloud Bread Recipe | How To Make Cloud Bread For Keto and Low Carb Diets?

This Post Was All About NO CARB Cloud Bread Recipe | How To Make Cloud Bread For Keto and Low Carb Diets. 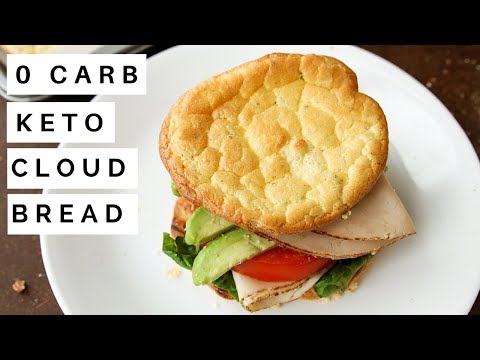 Cloud bread! Learn how to make cloud bread in today’s video. This low carb cloud bread recipe is PERFECT for the keto diet and low carb diets alike because each slice has LESS THAN 1g of carbs.

Separate the egg yolks from the whites
Add the yolks to a large bowl, along with all of the ingredients listed above, except for the cream of tartar
Use a hand mixer to combine all of those ingredients into one another and set aside
In another large bowl add the egg whites and cream of tartar and beat until super thick peaks develop in the bowl
Once they do gently add the whites mixture in with the yolks
Try to keep as much “fluffiness” to the whites as you can while doing this
Once combined, add to large spoonfuls -per slice of cloud bread – to a baking sheet lined with parchment paper (the recipe makes 10 pieces, so you’ll need two trays)
Bake the trays at 300 Degrees for about 30 minutes
Let the cloud bread cool completely in the tray

Understanding Fats: Which Fats are Not Stable

How to Absorb Nutrients: 3 Best & 2 Worst Foods for Nutrient Absorption-... Scroll to top