You are here: Home1 / All Articles2 / Keto Course3 / Nitro Coffee vs Regular Coffee – Which One is For You?

More specifically, you want help with Nitro Coffee vs Regular Coffee – Which One is For You??

This Post Was All About Nitro Coffee vs Regular Coffee – Which One is For You?. 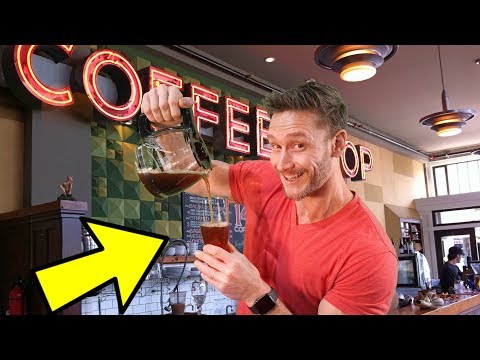 Nitro Coffee vs Regular Coffee – Which One is For You? – Thomas DeLauer

Unlike regular coffee, it’s served directly from the tap and is enjoyed cold rather than hot – often touted as superior to regular coffee, both in terms of taste and texture, as well as the health benefits it supplies

As mentioned, cold-brew coffee infused with nitrogen gas is released through a pressurized valve with tiny holes – as high pressure forces the cold brew past a disc, it creates a creamy, stout-like effect

Elemental nitrogen is a gas at atmospheric pressure and room temperature – chemically, it’s dead, meaning it’s an inert gas and that it won’t react with anything

Note: The only way that it can harm you (except for the bends) is if it is present in a sufficiently high concentration so that it displaces oxygen

The inertness of nitrogen was at least one of the reasons that nitro-coffee was invented, and chemically, it makes sense for two primary reasons:

With carbonated coffee: When carbon dioxide is dissolved in water a small amount of carbonic acid is formed – acids have a sour taste and it tasted awful

And nitrogen has another benefit – solubility in water, more specifically, its lack thereof:

Since nitrogen doesn’t dissolve in water until it is pressurized, it forms very small bubbles, which do not change the taste of the coffee but do affect the texture (it becomes creamy)

Nitrogen provides another benefit, again because of its inertness:
It displaces oxygen, which oxidizes some of the chemicals in coffee, and this prevents it from spoiling

However, simply spritzing a little nitrogen in coffee isn’t going to do much, since enough oxygen will still exist in solution to spoil the coffee, but the pressurized nitrogen also gets rid of the oxygen in solution- a process called degassing

exposing coffee grounds to hot water releases oils that won’t dissolve at lower temperatures. These oils are full of acidic compounds that give coffee its famous bitter bite either by fully immersing the ground coffee in water or using a drip system. But because cold brew is made using water at room temperature (as opposed to about 200 degrees for hot coffee), the process is much slower, taking up to 24 hours in some cases.

Room temperature water extracts fewer water-soluble flavors from the coffee (which is why cold brew coffee is prized for its lack of bitterness), but there’s one thing it doesn’t extract less of: caffeine. In fact, the slow process extracts more caffeine than traditionally-brewed coffee.

This is because caffeine’s solubility is primary driven by temperature, such that at higher temperatures, significantly more caffeine will dissolve in solution than at cooler temperatures

If you are using the same brew-to-water ratios, the cold brew will definitely have less caffeine than hot

But, cold brew coffee is typically made with a higher ratio of coffee to water – 2 to 2 1/2 times more – which means it is stronger than if made with a more conventional coffee-to-water ratio

However, cold brew is made as a concentrate that should be diluted with one part coffee to one part water or milk, which brings that caffeine level right back down – really depends on the maker
Starbucks example: A 16-ounce cold brew from Starbucks is reported to contain 200 mg of caffeine, while a hot 16-ounce coffee can contain anywhere from 260 to 360 mg, depending on the beans you choose

2) The effect of bean origin and temperature on grinding roasted coffee. (n.d.). Retrieved from

These 5 Foods are BIG Keto MISTAKES – Avoid Them

Get Restorative Sleep with Vitamin D