This Post Was All About Muscle Growth: Fast Reps vs. Slow Reps- Thomas DeLauer. 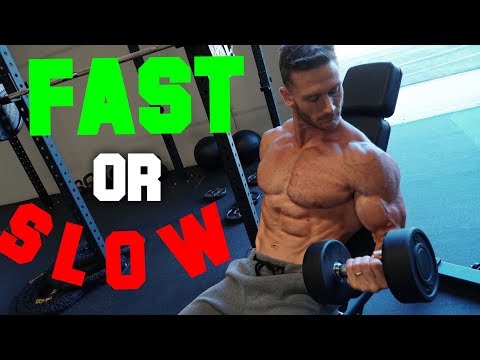 Muscle Growth: Fast Reps vs. Slow Reps- Thomas DeLauer… Let’s talk about the good, the bad, and the ugly of the negative workout. Eccentric contractions, we hear a lot of people on the internet talking about how eccentric training, focusing on the negative portion of a rep, is going to get you better results. Well, there is some very positive science pointing towards negative training, but we want to focus on the big picture and some practicality here. Today, we’re talking about the different styles of training. But I want you to understand the mechanics of how a muscle actually contracts because then everything will make some sense.

First and foremost, let’s get the basics out of the way. You have two phases of muscle contraction: concentric and eccentric. I’ll make it simple for you. Concentric is when you’re flexing. Eccentric is when you are relaxing, but you’re still under load. Now, what we have to look at is what actually is happening with muscle fibers. I’m not going to go into exquisite detail here, but basically what we need to understand is we have these filaments. We have these long filaments that are part of the muscle. What happens is we have specific parts of the muscle that have little hook-like things. I want you to visualize hooks like this, okay? What happens is, when you’re overlapping your muscles, when you’re actually starting to contract, you’re overlapping these little fibers. When you first start to overlap, you only have a couple of hooks. But as you start to contract more, the muscles slide over one another, and you have more hooks that are able to make contact with each other. When you’re at the peak contraction, halfway through, you have the most hooks making contact with each other. This means that you get the most strength. That’s why you have the most strength at the mid-range of a movement.

For example, a bicep curl, as I’m flexing, I’m going to have good strength right here. But what happens after that? What happens when you go past mid-range? Well, it looks something like this. You’ve slid over. You didn’t have much traction. Now you have full traction, but now you’ve gone so far that you don’t have traction anymore, so you’ve gone beyond it. You go from no traction, lots of traction at the mid-range, and no traction again at the end. That’s why you get weaker at the very top of a movement. Think about a bench press. Kind of weak here, then you’re really strong here, and then, as you get to the top, you kind of get weaker again. It’s because the muscle fibers are contracting beyond where they can actually overlap each other. Now, when we look at concentric contractions, you only have that peak maximal contraction halfway through the movement. But eccentric contractions are very interesting because eccentric contractions are on the way down. Generally speaking, you’re going to have an eccentric contraction when you’re still under load, so that means that the muscle fibers are engaged, and they’re actually getting that maximal load through the entire movement on the way down versus you having to exert force and actually get these little hooks to grab. Now you have all these hooks grabbing each other as you’re letting the weight down.

Now, when you’re actually looking at the eccentric contraction too, you have more neural activation. Why? Because there’s a lot of stability that occurs, and there’s a lot of different muscle fibers that have to activate because you are being “overwhelmed” by the weight. The whole idea here with eccentric contractions is you are allowing the weight to overwhelm the muscle because you are letting it win. You’re letting it down. That requires a lot of neural activity. But what they’ve actually found is that you exert about 20% more force, you generate 20% more force on the negative contraction than you do on the concentric, on the up movement. That’s simply, again, because the amount of the actual filaments that have to get activated and overlap to control a heavy weight on the way down. Now, the other thing we have to factor in is, when you are letting a weight down in that concentric motion, that’s where the damage occurs. You don’t actually break down and tear muscle fibers on the concentric. In fact, you’re just kind of working them.

Will Fruit Make you Fat? How to Monitor Fructose- Thomas DeLauer

11 Benefits of a Nap

What Would I Eat If I Had Cancer?

Do You Have a Copper Deficiency? Scroll to top