You are here: Home1 / All Articles2 / Keto Course3 / Morning Coffee: Are You Drinking it too Soon after Waking?

Morning Coffee: Are You Drinking it too Soon after Waking?

More specifically, you want help with Morning Coffee: Are You Drinking it too Soon after Waking??

This Post Was All About Morning Coffee: Are You Drinking it too Soon after Waking?. 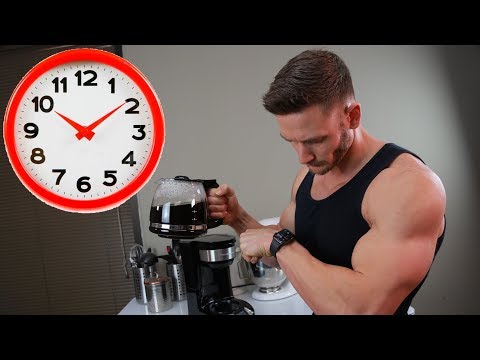 Morning Coffee: Are You Drinking it too Soon after Waking? – Thomas DeLauer

Humans are guided by the 24-hour hormonal cycle referred to as the circadian clock, which is preprogrammed into us genetically and although we can mess with our cycles through lifestyle habits, the major factor in its regulation is sunlight

The peak production of cortisol occurs between 8–9 am (under normal circumstances) – this means that at the time that many people are having their first cup of coffee, their bodies are actually “naturally caffeinating” the most effectively

Therefore, timing your coffee breaks between 9:30-11:30 and 1:30 and 5:00 takes advantage of the dips in your cortisol levels when you need a boost the most

One of the most important biological rhythms is, as mentioned, your circadian clock – this endogenous 24 hour clock alters your physiology and behavior in variety of ways but it can also alter many properties of drugs including drug safety (pharmacovigilance), pharmacokinetics, drug efficacy, and possibly drug tolerance

Fun fact: In studies, by creating an “island” in the brain by methodically cutting the hypothalamus away from any surrounding tissue, the circadian clock was completely lost

Drug tolerance is an important subject, especially in the case of caffeine since most of us overuse this drug

Therefore, if we are drinking caffeine at a time when your cortisol concentration in the blood is at its peak, you probably should not be drinking it

In the morning then, your coffee will probably be the most effective if you enjoy it between 9:30 and 11:30am, when your cortisol levels are dropping before the next spike

Published in The Journal of Clinical Sleep Medicine, researchers analyzed how caffeine disrupts sleep when consumed at different points in time during the day

During the study, they maintained their normal sleep routines with bedtimes from 9 pm to 1 am, and wake times of 6 am to 9 am – they slept somewhere between 6.5 to 9 hours each night without napping during the daytime

Participants were given a fixed dose of caffeine, along with placebos, at 0, 3, and 6 hours before bedtime – 400 mg of caffeine was administered, which is equivalent to around four cups of coffee

However, the perception of caffeine’s effect on the body was not a direct measure of how it affected sleep

When caffeine was consumed 6 hours before bed, they did not report any effect to their sleep quality – the sleep monitor showed a different story, though

Concluded that we shouldn’t fully rely on our own perceptions to judge how caffeine is really affecting us, especially when it comes to sleep

1) Caffeine Stimulation of Cortisol Secretion Across the Waking Hours in Relation to Caffeine Intake Levels. (n.d.). Retrieved from

4) Anthony Wing Kosner. (2014, January 6). Why The Best Time To Drink Coffee Is Not First Thing In The Morning. Retrieved from

3 of the Quickest & Easiest Keto Dessert Recipes on the Internet!

How to Reverse Insulin Resistance

The 5 Weight Loss Mistakes that Everyone Makes!

How to Get Rid of Acne Fast Scroll to top