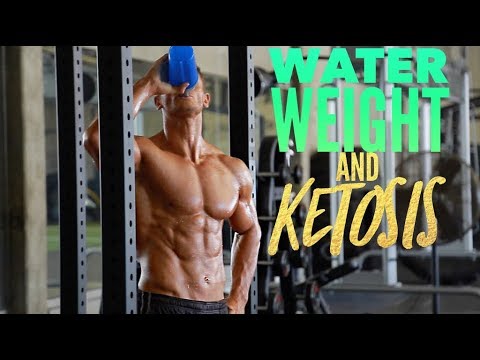 Low Carb Ketogenic Diets & Dehydration: Water Weight- Thomas DeLauer… For every gram of glycogen about 3 grams (2.7g) of water are stored as well.

Insulin:
As those stores are depleted, our kidneys go from retaining water to excreting more of it. When we are on a higher carb diet, we naturally have higher insulin levels – insulin affects our kidneys in such a way to retain sodium which can lead to a higher sodium/potassium ratio. Excess insulin shifts metabolism into storage mode, converting dietary sugar and fat into stored body fat – this leads to weight gain. But, too much insulin also makes the kidneys retain sodium, causing water retention and high blood pressure when insulin levels are high. When we are on a low carb, ketogenic diet we have lower insulin levels and therefore our kidneys excrete more sodium, which can lead to a lower sodium/potassium ratio and a greater need for sodium in the diet – leads to dehydration.

Dehydration:
Water makes up more than 50% of your body and is simply needed for survival. By drastically restricting carbs, this leads to the body shedding water weight rapidly, which is why dehydration is the most common side effect of a ketogenic diet that you will likely experience in the first few weeks. This can result in an electrolyte deficiency and what many refer to as the “keto flu” – since the main reason for electrolyte depletion on keto is excess water excretion and less water retention.

Constipation:
Dehydration & electrolyte deficiency is also a cause of constipation and is a problem people on the keto diet face. Our stools are largely composed of water – 75% of the feces is composed of water, while only 25% is attributed to solids. These solids are composed of cellulose or other indigestible fibers, bacteria, fat, mucosal cells, and small amounts of digestive enzymes. The colon is highly capable of absorbing fluid – it is where the final phase of reabsorption takes place. Normally, sodium ions are being actively transported inward from the colon, and since water follows sodium, then water is also reabsorbed. This is why the colon is a practical route for pharmacologic interventions in the form of suppositories, anesthetics, sedatives, and the like. When the body is depleted of water, the colon’s capacity for water reabsorption is enhanced. Normally, the colon removes about 90% of the fluid, converting approximately one to two liters of chyme that enters it into a semisolid fecal matter. However, this is increased further when dehydration ensues. As a result, the chyme temporarily stored in the colon loses a great deal of water, and therefore the stools lose a great amount of bulk. This results to slower passage of stools down the colon, and therefore constipation.

Solution:
Increasing water and electrolyte intake (potassium, sodium, calcium, and magnesium) is the best way to prevent issues with imbalances – not consuming enough fibrous vegetables and fermented foods can also cause issues. In keto, consuming 3-5g of sodium per day (either from foods or sea salt) can help to decrease the risk of dehydration and constipation. **1 tsp of pink salt is equivalent to about 2g of sodium**

References:
1) Common Low-Carb Side Effects & How to Cure Them ? Diet Doctor. (n.d.). Retrieved from

3) How to Avoid Dehydration and Electrolyte Imbalances on Keto | BioKeto. (2018, January 31). Retrieved from

Fasting ATTRACTS Fat to Your Cells

Boost Your Energy on Keto (Ketogenic Diet) Doing This…

How to Get Your Body to Eat Its Own Fat