This Post Was All About Ketosis: When to Eat Carbs- Ketogenic Diet | Thomas DeLauer. 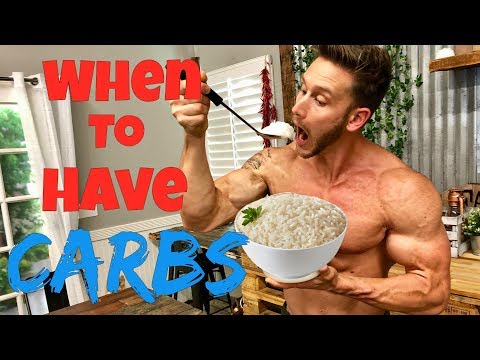 When to Eat Carbs in Ketosis: Low Carb Diet Carb Timing & Cheat Meals… On average, the body can only store about enough glycogen for 2 hours-worth of exercise. In ketosis, glucose is not being used by the brain so it goes directly to your muscles. Due to the minimal amount of carbs consumed, some of the protein you consume is converted to glycogen via gluconeogenesis. Not a Critical Need to Refeed, Per Say, however, Glycogen Replenishment is great for those training heavy.

Excerpt from the Ketogenic Diet book, published by Lyle McDonald:
“The initial storage depot of carbohydrate in the body is the liver, which contains enough glycogen to sustain the brain’s glucose needs for approximately 12-16 hours. We will assume for the following discussion that liver glycogen has been depleted, ketosis established, and that the only source of glucose is from endogenous fuel stores (i.e. stored body fat and protein). After its glycogen has been depleted, the liver is one of the major sources for the production of glucose (gluconeogenesis) and it produces glucose from glycerol, lactate/pyruvate and the amino acids alanine and glutamine. The kidney also produces glucose as starvation proceeds.”

Note that athletes, even on a low carbohydrate diet, your body accumulates some glycogen from protein molecules, and they use it when they exercise and then rebuilt it the next day or two.
Study 1: The paper’s authors measured the performance of ultra-endurance runners who regularly run upwards of 100 miles. Here’s how they set it up:
Half of the participants ate low-carb (20% of calories from carbs) for 6 months.
The other half ate high-carb (55% of calories from carbs) for 6 months. On test day, athletes ran for 3 hours. The researchers measured the runners’ energy expenditure and gathered blood, muscle tissue, saliva, and a variety of other samples. They then pieced everything together to better understand what each group was burning for fuel, and how hard they had to work. What was more fascinating is that both groups had the same muscle glycogen levels during and after exercise, and they weren’t breaking down their muscles to do it.

Study 2: In one study, looking at well-trained cyclists, the rate of glycogen used by keto dieters was cut by a factor of 4.
They were starting out with half as much glycogen as the high carboh dieters, but you’d used glycogen four times more slowly. The study took bits of muscle out of their thigh muscles and measured muscle and measured glycogen before and after. On the same duration of riding and the same intensity, their rate of glycogen use was one-fourth as much.

Study 3: A study done in Arctic sled dogs by a scientist from Oklahoma State University, named Dr. Mike Davis – took a couple of racing sled dogs up in the Yukon and raced them 100 miles a day for five days in a row. They did a half Iditarod distance, going around the same 100 mile loop every day for five days in a row. He fed the dogs a high fat, moderate protein, low carb diet. He measured muscle glycogen in the dogs before they started. At the end of five days, he did muscle biopsies on the dogs again. That’s after racing 100 miles a day, pulling a sled, being fed adequate calories in a low carb, moderate protein, high-fat diet. At the end of five days, they had more glycogen in their muscles than they did when they started. Their muscle cells were sucking up every little bit of what they could find and putting it right back in the muscle as glycogen. And doing it much more efficiently than when they were fed a high carb diet.

Synovial Fluid/Cartilage: Rice, potatoes, sweet potatoes, pumpkin or other starchy vegetables are preferable – Proteoglycans are essential for forming cartilage and bone and are a combination of protein and glucose. So starch and protein are essential for good bone formation.

Resistant Starch – Carbs You Can Eat with Little to No Impact

Always Stretch AFTER Your Workout Not Before