This Post Was All About Ketosis Dairy Alternatives: Best Nut Milks- Thomas DeLauer. 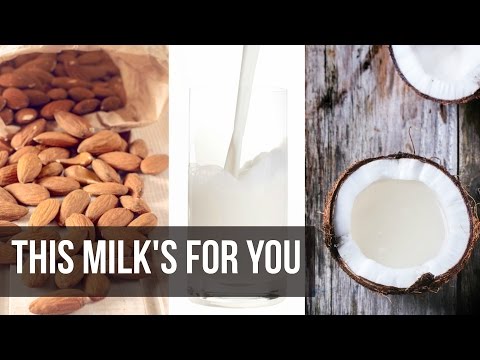 Ketosis Dairy Alternatives: Best Nut Milks- Thomas DeLauer… Get more nutrition tips at:
Almond Milk:
-Pros-
Fiber
Contains 1 gram of fiber per 8 ounce glass
Fats
Omega-3 fatty acids
Monounsaturated fats
Linked to heart health
Phytosterol antioxidants and flavonoids
Vitamins and minerals
Riboflavin (vitamin B2)
Iron
Potassium
Higher in vitamin E and calcium than traditional milk
Low in calories – 30-60 calories per 8 ounces
No cholesterol
Easy to make your own
*If you make your own you will retain more nutrients due to less processing
-Cons-
Tree nut allergy
Important to get organic
Low in protein – about 1 gram per serving
Must be careful of added fillers
Carrageenan – thickening agent
Has been linked to inflammation, especially gut inflammation

Cashew Milk:
Taste: A little creamier and sweeter than almond milk, slightly less nutty of a flavor. Similar nutritional profiles.
-Pros-
Low in calories – 25-40 calories per 8 ounces
Healthy fats: monounsaturated fats
No cholesterol
Vitamins and minerals
Contains many of the naturally occurring vitamins and minerals
Many will be removed during processing if purchasing store-bought
If making your own you will retain the natural Vitamin K, magnesium, and iron.
Others are added in to mimic that of dairy milk
Store bought is often fortified with calcium, vitamin B12, vitamin D and vitamin A
Easy to make your own!
You will retain much more fiber, healthy fats, vitamins and minerals by making your own cashew milk.
-Cons-
Low in protein
Tree nut allergy
Again must be cautious of additives

Coconut Milk:
Taste: Light, slightly sweet and silky. A very mild coconut taste.
-Pros-
Healthy fats – about 4.5 grams per serving
High in lauric acid
Converts to monolaurin, which is effective against bacterial, viral and fungal infections, and have been shown to boost the immune system.
Even great for skin health:
The antibacterial properties of lauric acid isn’t only good for our internal health, but for our skin’s health too. Inflammatory acne can be attributed to the overgrowth of a gram positive bacteria known as P. acnes. A 2009 study demonstrated that lauric acid was 15 times more effective at inhibiting growth of P. acnes than benzoyl peroxide, which is found in many acne medications.
Vitamins and minerals
Generally fortified with vitamin D and calcium to mimic the nutritional profile of cow’s milk
-Cons-
No protein
Higher in calories than almond or cashew milk, ranging from about 45-75 calories in store-bought coconut milk
Again must be cautious of additives
Lowest in calcium

Flax Milk:
Taste: Light and creamy, most milk-like (no nutty or coconut taste)
-Pros-
Healthy fats
Omega-3 fats
No cholesterol
Low in calories, about 50 calories per serving
Fortified with vitamins and minerals
Store bought is often fortified with calcium, vitamin B12, vitamin D and vitamin A
-Cons-
No protein
Again must be cautious of additives

**Note: Cashew and almond milk are easy to make at home. They will be much more nutritious with more vitamins, minerals, and healthy fats.

Store-bought cashew, almond and flax milk are very similar nutrient wise, with flax the closest to having a neutral taste and cashew milk being the creamiest. Coconut milk has a different fat profile with slightly more calories.

If you make these at home, cashew and almond milk will tout many additional benefits with an even creamier taste for both.

Vitamin C MEGADOSING for Prevention of Illness (Science + My Opinion)