This Post Was All About Ketogenic Diet: Top 3 Ketosis Tips for Results: Thomas DeLauer. 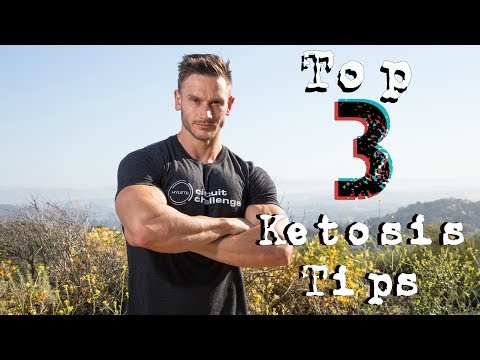 On a glucose-based diet, glycogen is produced in the liver, which is water-soluble and transported around the body in your blood.

The blood stream distributes energy to all the cells and muscles that need it.

Glycogen is also stored in the muscles, so the blood-motorway tops-up these stores when required.

Glycogen is transported in liquid and is water-soluble – glycogen itself contains a lot of water. It’s stored in liquid form – three to four parts water to one part glycogen

When you restrict carbohydrate, you stop consuming glucose, which is from what glycogen is made

Your stores of glycogen therefore deplete as your body burns energy, and because glycogen carries 3-4 parts water; your body loses a heck of a lot of liquid as well

So in entering a state of ketosis, your body is excreting water and salt through the depletion of glycogen.

High salt-levels trigger the thirst mechanism, but if salt-levels are going down (as is water), it naturally follows that the thirst-mechanism is not sufficiently triggered to cover this water-loss.

Conversely, when you cut carbs your insulin-levels decrease, which then tells your kidneys to release salt. (1,2)

Using MCT oil is perhaps the most important thing one can do to get into ketosis and maintain it.

A diet that consists of long chain fatty acids depends upon 80-90% of calories coming from fat. Adding in lots of MCT oil brings this down to 60-70% fats

Many people believe that coconut oil is the same as MCT oil; however, MCT oil is made from coconut oil, it contains 100% pure medium chain triglycerides (capric and caprylic acids)

Coconut oil contains about 35% long chain trigylceride (LCT) and 50% lauric acid, which means that coconut oil is only 15% MCT and only 1/6th as ketogenic as pure MCT oil.

More simply, MCT’s can be metabolized quickly into ketone bodies, which means that the body metabolizes the MCTS’s quickly because it recognizes them as more of a carb than a fat.

MCT’s also have fewer calories, which will essentially allow you consume more proteins and carbs, making ketosis easier to maintain. (3,4)

The body’s preferred source of fuel is glucose, which it gets first from carbohydrates on a standard diet.

However, if enough carbs aren’t present, which is the case when you’re eating low-carb or ketogenic, the body will have to turn to other sources for energy.

The purpose of the keto diet is to have the body break down fatty acids, which then produces ketones for energy – the process known as ketosis.

However, there’s another way the body can create carbohydrate-style energy in the body – by breaking down amino acids from the protein in your muscles.

Gluconeogenesis is how your body turns protein into glycogen that can be used as glucose to burn for fuel.

Even if you’re eating plenty of fat, if you also eat too much protein, your body can facilitate GNG instead of burning fat for energy.

This means that you could spend your whole time thinking you’re eating keto while not actually being in ketosis. (5)

1) The role of salt in a ketogenic-diet. ‘Keto-Flu’ explained! | country walks in ketosis. (n.d.). Retrieved from

4) 5 Ketogenic Diet Master Tips – Best Ways to Get Into Ketosis. (n.d.). Retrieved from

5) How Too Much Protein is Bad for Ketosis – Perfect Keto Exogenous Ketones. (n.d.). Retrieved from

6) The Myth of 1 g/lb: Optimal Protein Intake for Bodybuilders. (n.d.). Retrieved from /

This Strategy Helped me Lose the Last 25lbs

What Causes a High Pulse Rate?

Do This for Stress Now!

It’s “Backed by Science” TRUST US

Understanding Net Carbs on the Ketogenic Diet Scroll to top