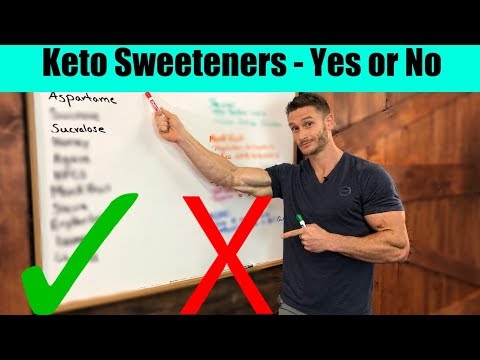 Keto Sweeteners: List of Approved Sugar Substitutes- Thomas DeLauer…
Stevia:
Steviol glycosides are poorly absorbed in the body and pass through the upper gastrointestinal tract fully intact. Once steviol glycosides reach the colon, gut bacteria convert steviol glycosides into steviol – steviol is then metabolized by the liver before being excreted in the urine. And the steviols have actually been shown to lower insulin and glucose due to its lack of metabolization.

Monk Fruit:
Monk fruit sweetener is made from extract derived from dried fruit – the extract is 150-250 times sweeter than table sugar, has zero calories and carbs, and does not raise blood glucose levels

Been shown in studies to reduce NF-kB and decrease the production of inflammatory molecules such as iNOS, COX-2, and IL-6

Erythritol (and other sugar alcohols):
Once sugar alcohols are absorbed they use very little to no insulin to convert to energy – not all of the sugar alcohol passes into the bloodstream, and the rest passes through the small intestine and into the large intestine. Erythritol, however, is considered the safest sugar alcohol as it the most well tolerated in terms of digestive discomfort – it has no effect on blood glucose and has zero calories (naturally found in fruits, vegetables and fermented foods)

High Fructose Corn Syrup:
When fructose is metabolized, it turns into free fatty acids and triglycerides, which get stored as fat – fatty acids accumulate as fat droplets in your liver and skeletal muscle tissues, causing insulin resistance and non-alcoholic fatty liver disease.

A byproduct of liver metabolism is that your liver begins to create uric acid, causing blood pressure to increase and can result in gout – also has no effect on ghrelin and has been shown to cause overeating

Table Sugar:
Regular table sugar is broken down into fructose and glucose when it enters the bloodstream

And, as mentioned, excess fructose gets turned into glycogen, becoming a danger for those in a ketogenic state

Most processed honey also has added sugars and is usually pasteurized, losing most of the nutritional benefits it has

Additional:
Agave syrup is generally seen as a low GI sweetener – while Agave Syrup is about a 9.6 GI due to low glucose content, it is mostly fructose and very highly processed

Artificial Sweeteners:
Artificial sweeteners are synthetic sugar substitutes that are regulated by the FDA – can be more than 100x sweeter than sugar and provide a zero calorie alternative

One study, published in the journal Epilepsia, subjects successfully stayed in ketosis despite being given saccharin (Sweet’n’low) every day

Downside to Artificial Sweeteners:
A study, from the Journal of Food and Chemical Toxicology, concluded that saccharin negatively impacts gut bacteria and promotes liver inflammation.

What Is An Electrolyte?

Quick Way to Know if You Have Brain Damage

Responding to Fasting Comments (Your Questions Answered) Scroll to top