This Post Was All About Keto Food Haul – Costco CANADA Edition!. 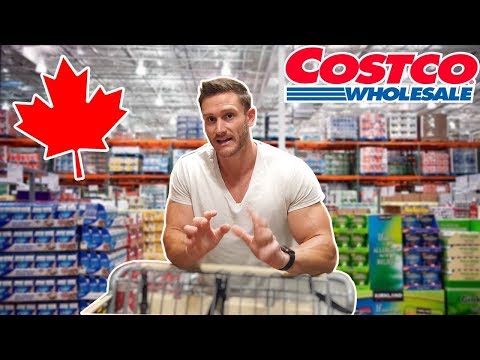 I know some items are at an American Costco that are also at a Canadian Costco, but there are some that I’ve had to go and source at a Canadian Costco and bring into my studio. I’m going to do part of the production here at a Costco and then I’m going to go back to the studio, I’m going to pick out the top Canadian keto-friendly items that you can get in Costco up in Canada. Let’s head on in and let’s do a partial grocery haul and then go back to the studio and break down some ingredients.

Okay. So it’s going to be slightly different items. However, what I will recommend if you are shopping at Costco is once again, when it comes down to the poultry, try to go for the leaner meats, all right? I’m going to make this quick because I want to make this nice and easy for you guys. I’m going to go with organic chicken breasts instead of the chicken thigh. You’re thinking, “Hey, this is keto. Why are you going breast and not thigh?” Simply because calories and fat I would much rather get my fat from tasty things like nuts and seeds and stuff like that than blow my caloric budget if you will on chicken thighs. If I’m going to get fatty cuts of meat, it’s going to be red meat.

The fresh section is a little bit hard for me to tell you what you’re going to have at a Canadian Costco, so we’re just going to hit the frozen section because I know some of the stuff gets imported there. I know for a fact they have the frozen shrimp there which is awesome so it’s good to check that out.

I think you guys have these in Canada. These are really good chicken patties. Super minimal ingredients, minimal process, pretty darn good price. I’m not going to grab them today, I’ve grabbed them before, but just letting you guys know.

Another thing, these Wild Alaska salmon burgers are also really solid. You can see the ingredients on them. It’s a cut of salmon … Ooh, I take that back. Watch for anything that has vegetable oil like this. Cut of salmon, vegetable oil because it’s got soybean oil or canola, and then a bunch of other stuff which really isn’t that big of a deal but I don’t want that soybean oil. Perfectly good fatty acid profile with the omega-3’s from salmon. You just ruined them with soybean oil.

Let me get some shrimp. On keto, you lose your minerals. Some of the best mineral profile that you’re going to get is from shellfish. Specifically shrimp. I do know that you have these. It might look slightly different with your bag at Costcos in Canada. I definitely recommend getting this. That’s a really good price and you’re looking at 11 servings with 18 grams of protein per serving, so this is going to last two weeks.

First, we’ve got some avocado oil spray. Now in Canada, it doesn’t quite look like this. In fact, you can see it looks a little bit different, it’s a different brand. Then you look at what I have to say when I’m picking this up at the store and you can find out it’s some pretty good stuff.

As I’m walking by, you’re going to want to get apple cider vinegar too if you’re in Canada. I know you’ve got that. The avocado oil spray looks a little bit different but it’s still ultimately the same. Avocado has a higher smoke point so it’s better to cook with. Don’t get canola oil. Don’t get soybean. Definitely don’t get olive oil in a spray because that implies that you should be cooking with it. You don’t want to be cooking with olive oil. You want to be cooking with avocado oil because it can handle 500, 600 degrees when you cook with it. It doesn’t denature and go through lipid peroxidation. I know you’ve got that in Canada.

That breaks it down. We got a couple hundred bucks here U.S. Probably a little bit more if you’re in Canada. We’ve got a pretty decent little haul.

Why the Dark Circles Under Your Child’s Eyes

The Bigger Problem with Chronic Inflammation