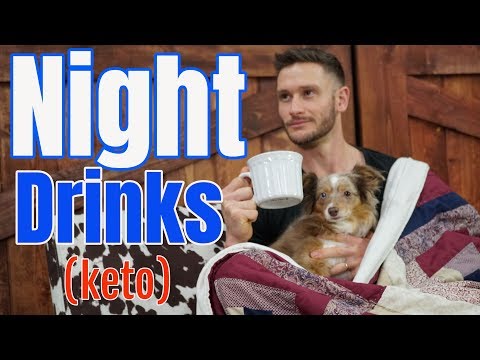 Keto Chamomile Tea:
Chamomile- Works as an anti-inflammatory as it contains three terpenoids (α-bisabolol, bisabolol oxide A, and guaiazulene) that reduce inflammation by inhibiting COX. The sedative effects are believed to be due to the flavonoid, apigenin that binds to benzodiazepine receptors in the brain (benzodiazepines are a type of medication known as tranquilizers).

Ghee:
A study published in Frontiers in Behavioral Neuroscience found that dietary prebiotics may improve sleep and reduce stress. Specifically, researchers noted that diets rich in prebiotics improved time spent in NREM (Non Rapid Eye Movement) sleep – the stage in which brain waves are slowest, physical restoration and recovery occurs. After 4 weeks, researchers discovered that rats supplemented with prebiotics had more beneficial probiotic bacteria in their guts, compared to rats from the control group. One of the increased probiotic bacteria was Lactobacillus rhamnosus – lactobacillus rhamnosus reduces anxiety- and depression-related behavior. Also, it calms down the exaggerated hypothalamic–pituitary–adrenal axis (HPA axis).

**Additionally, ghee contains butyrate, which acts a precursor to GABA, which may explain the improved sleep**

Coconut Oil:
Aside from the monolaurin benefit, the fat in coconut is beneficial right before bed because the fat gives your body sustained energy throughout the night. Having it before bed will prevent you from waking up hungry – also, coconut oil fats prevent your blood sugar/insulin from spiking which is often a cause of sleeping troubles. Lakanto Drinking Chocolate (w probiotics) + chocolate bar

Monk Fruit:
Mogrosides give monk fruit its sweet taste, but despite that, it contains no calories and has no effect on blood sugar. Mogrosides are antioxidants that decrease blood vessel leakiness (permeability), inhibit histamine release from mast cells, and prevent inflammatory damage. It has been shown in studies to reduce NF-kB and decrease the production of inflammatory molecules such as iNOS, COX-2, and IL-6
Aside from being sweetened with monk fruit, contains cacao and probiotics (can link back to probiotics and sleep).

Cacao:
Cacao helps stimulate serotonin production in the brain, which regulates your mood and helps suppress your appetite, which means you’ll consume less calories in the long run. Also contains both anandamide and phenylethylamine, both of which induce euphoria, act as an aphrodisiac and boost overall mood – phenylethylamine releases norepinephrine & increases dopamine. Cacao also contains tryptophan: tryptophan turns to 5 HTP, which plays a key role in creating serotonin, and increases melatonin levels

Lemon:
Lemons contain a soluble fiber known as pectin that increases digestive health – pectin works by binding to fatty substances in the digestive tract, including cholesterol and toxins, and promotes their elimination

Salt:
Salt also contributes to another important anti-stress action in the body: it raises your oxytocin levels.
Oxytocin is a hormone that helps you feel calm and relaxed, and increases your sense of well-being –the exact feelings you’ll want to experience if you’re trying to settle down and get ready for sleep.

What is Leech Therapy?