Blog - Latest News
You are here: Home1 / Keto Course2 / Use Iodine to Boost Your Thyroid

Use Iodine to Boost Your Thyroid

More specifically, you want help with Use Iodine to Boost Your Thyroid?

This Post Was All About Use Iodine to Boost Your Thyroid. 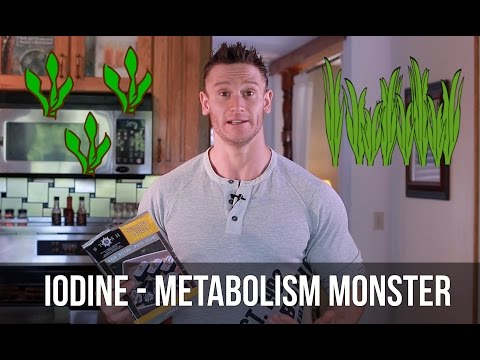 Did you know you can use iodine to boost your thyroid? More health hacks located at
What is the Thyroid?
1. The thyroid is a small, butterfly-shaped gland located at the front of the neck. (1)
2. Plays a role in metabolism, development, growth and body temperature. (1)
3. When not functioning properly, one can experience metabolism and weight problems, and even mood disorders, such as depression. (2)
4. How does the thyroid work? (3)
a. The thyroid take iodine that you consume and combines it with the amino acid tryocine in order to convert it into the Thyroid hormones, thyroxine (T4) and triiodothyronine (T3).
b. T4 and T3 and then transported via the bloodstream throughout your body, playing a key role in a properly functioning metabolism, which is the conversion of oxygen and calories into energy.
c. T3 is four times as strong as t4
d. Another gland, the pituitary gland, is responsible for communicating with the thyroid, essentially telling it when to turn on and turn off the production of T3 and T4. The gland is in turn regulated by the region of the brain called the hypothalamus.
e. You must have a proper amount of iodine consumption in order to feed the thyroid and ensure proper functioning – either too little or too much can lead to a slew of health problems. Essentially, without iodine, the thyroid cannot function.
5. Back in the early 1920s the US added iodine in salt due to a nutritional deficiency of iodine leading to diseases such as goiter. This was due to people not consuming enough iodine rich foods. (4)
. The problem with this is that the iodine in the white table salts is not the naturally occurring iodine and contains chemicals that are bad for our health
a. Naturally occurring salts, such as pink Himalayan sea salts, contain trace amounts of iodine and do not contain the chemicals that are bad for our health
b. Other naturally occurring sources of iodine are sea vegetables such as seaweed and kelp, cranberries (eat actual berries, not juice due to sugar content), organic yogurt, organic navy beans, organic strawberries, organic, raw cheese and organic potatoes. (5)
c. If you supplement, be sure not to exceed 500 mcg of iodine daily from all sources. You can take natural supplements, such as kelp supplements. Otherwise it is good to take potassium iodide, which can encourage proper thyroid functioning. (6)
6. It is a good idea to speak with your doctor prior to supplementation to be sure that you do not take in too much iodine. Taking too much iodine is dangerous just as not having enough in your diet is. A compilation study from the Best Practice and Research Clinical Endocrinology and Metabolism discussed the importance of keeping iodine levels “within a relatively narrow interval where iodine deficiency disorders are prevented, but not higher. Monitoring and adjusting of iodine intake in a population is an important part of preventive medicine.”
1. WebMD: Picture of the Thyroid
2. WebMD: Depression, the Thyroid and Hormones
3. Endocrine Web: How Your Thyroid Works
4. Global Healing Center: Iodine in Salt: Why is it Added
5. Global Healing Center: 7 Foods Rich in Iodine
6. Global Healing Center: The Benefits of Potassium Iodide
7. Iodine intake as a determinant of thyroid disorders in populations.
Best Pract Res Clin Endocrinol Metab. 2010 Feb;24(1):13-27
7