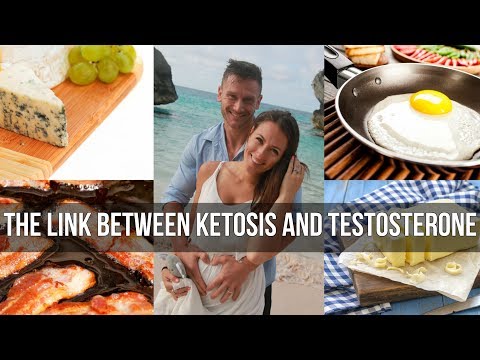 Does Ketosis Increase or Decrease Testosterone?
Male Optimization Coaching:
Ketosis Diet and Testosterone | Low Carb Diet Increases Testosterone: Thomas DeLauer
Ketosis is a metabolic state that occurs when dietary carbohydrates are in such low quantities that your body must rely almost exclusively on fatty acid oxidation and ketone metabolism
A traditional ketogenic diet sees you reduce carbs to around 5% of total energy intake with a maximum carb limit of 50g per day.
This means eliminating starchy vegetables, pasta, rice, sugary drinks and all sweet treats from your diet – results in your body switching from carb burning to fat burning.
Ketosis and Testosterone
There has been conflicting evidence as to whether or not ketogenic diets reduce or increase testosterone
However, it should be noted that many of the diets studied weren’t truly keto, but rather a “lower carb diet”
For example, one study found that when carbs were reduced to 30% of total energy intake, testosterone significantly reduced; as did its ratio to cortisol. Keep in mind that keto diets suggest a carb level of as little as 5%
This resulted in too little carbs to help with the production of testosterone and too little fats (cholesterol) to help with the production of testosterone (1)
Sitting in the grey area of not enough fats nor carbs
Cholesterol and Testosterone
A ketogenic diet is roughly consists of about 75% fats, which will also be high in cholesterol
Cholesterol present in all of your cells, being especially dense in the membrane where it gives your cells the ability to send messages between each other and it can also be found in high amounts inside the brain
Your body needs cholesterol to produce its sex hormones. So if you drive your cholesterol down too far, you’ll be lacking in testosterone
Testosterone and cholesterol are both classed as steroids because they share a similar ‘steroid ring’ chemical structure – as do all other steroid hormones.
Cholesterol is the ‘parent compound’ of all steroid hormones, including T, as it is needed to form all steroid hormones. This makes it a sterol.
In order to convert into testosterone, it is converted into pregnenolone by an enzyme called Cytochrome P450.
From there it converts into other hormones such as androstenedione, eventually ending up as testosterone.
Simply put, cholesterol is a precursor to testosterone (2,3)
Case Study
The study looked at very low carbohydrate ketogenic diets (VLCKD) relative to a traditional high carbohydrate diet in resistance-trained athletes.
26 college-aged resistance trained men volunteered to participate in the study and were divided into two groups
– VLCKD (5 % CHO, 75 % Fat, 20 % Pro)
– Traditional western diet (55 % CHO, 25 % fat, 20 % pro). – study lasted 11 weeks
Total cholesterol increased slightly in the VLCKD group, while it decreased in the traditional western group.
However, this rise was driven by an increase in HDL in the VLCKD group (6.69 mg/dl) compared to the western (-1.6 mg/dl) with no changes in LDL.
Total testosterone increased significantly in the VLCKD diet (118 ng/dl) as compared to the western (-36 ng/dl) while insulin increased significantly in the western group (3.7 uIu/ml) compared to the VLCKD (.1 uIu/ml).
Concluded that a VLCKD is safe and increases testosterone levels while also increasing insulin sensitivity.
Even though the total cholesterol increased in the VLCKD group, their HDL (healthy cholesterol) drove this response. (4)
References
1) Does a Ketogenic Diet Affect Testosterone Levels? – TestoFuel Blog. (n.d.). Retrieved from
2) The Cholesterol and Testosterone Relationship – TestoFuel Blog. (n.d.). Retrieved from
3) Cholesterol and Testosterone: Hormonal Precursor | Anabolic Men. (n.d.). Retrieved from
4) Carbs vs. fat research update. (n.d.). Retrieved from /