This Post Was All About How to Make Healthy Cooking Oil Choices- Thomas DeLauer. 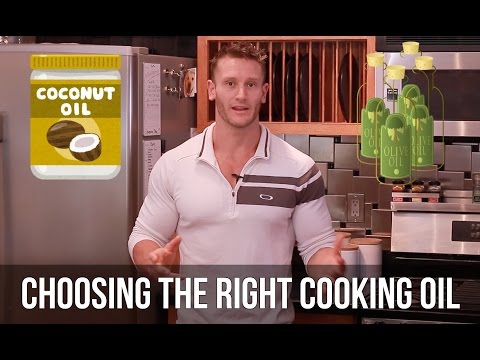 How to Make Healthy Cooking Oil Choices- Thomas DeLauer
Which Oil is best to cook with? What is best for cooking, may not always be best for fat loss… Want to work with me 1:1? I have a couple of spots still available! Click here:
There are so many cooking oils out there – olive oil, macadamia nut oil, coconut oil and avocado oil, just to name a few. What should you keep in mind when choosing the oil for your meal?
Which Oil is the Healthiest?
We must look at smoke point, omega-3 to omega-6 ratio, along with other health benefits of different oils.
Smoke point is the temperature at which an oil will start to smoke. This reaction causes free radicals and toxic fumes to be released in the air, and is not good for the nutritional benefits of the food or the health of the person cooking.
If you will be frying or sautéing it is important to use oils with high smoke points.
Frying (avoid frying whenever possible due to negative health effects of fried foods): Avocado oil, peanut oil and sesame oil have high smoke points and are safest for frying
Sautéing: The oils above plus coconut oil, macadamia nut oil and light virgin olive oil
*Oils with a high smoke point also have a longer shelf life, so if you use oil sparingly it is also important to go for an oil with a higher smoke point.
Fat Content: Some fats are good for our health while others are not and should be limited.
Omega-6 to omega-3 ratio: Western diet contains too many omega-6 fatty acids and too few omega-3 fatty acids. Omega-3 fatty acid consumption is linked to decreased inflammation, overall health improvement, better mood and memory.
-Unrefined flax seed oil has a very low omega-6 to omega-3 ratio, with four times as many omega-3 fatty acids. This oil has very low smoke point, so great in dressings or drizzled over already prepared foods.
-Macadamia nut oil has a 1:1 ratio, which is the ideal ratio overall in diet.
Monounsaturated fat: Great for cardiovascular health, cholesterol and cancer.
-Macadamia nut oil is 80% monounsaturated fat and has a great light, sweet nutty flavor. Good for use in baked goods, sautéing and used in dressings.
-Olive oil and avocado oil are also high in monounsaturated fat content.
Coconut Oil: Coconut oil is made up of natural, healthy saturated fats. Unlike man-made saturated fats, those in coconut oil have been found to help increase healthy cholesterol and decrease unhealthy cholesterol. Comprised of MCTs, which are available for immediate energy in the body.
-In a 2008 study in the American Journal of Clinical Nutrition, it was found that those who were selected to consume coconut oil rather than olive oil as part of a weight-loss program over 16 weeks experienced greater energy expenditure and improved weight loss.
Favorite Oil Picks:
Coconut oil for sautéing and as a general snack – eating a tablespoon of coconut oil will give you immediate energy!
Macadamia nut oil for baking and dressings – light, nutty flavor
Avocado oil – great for sautéing and high temperature cooking – very high smoke point so will have a longer shelf life and keep beneficial properties during cooking.
Tip: Store oils in cool, dark places. Purchase in small containers so that they do not degrade before use. If an oil tastes or smells bitter or off, throw as it has likely broken down.
References:
1. Heart-Healthy Cooking: Oils 101
2. Healthiest Cooking Oil Comparison Chart
3. Cooking Oils
4. Weight Loss Diet that Include Consumption of MCT Oil…
Subscribe to the Thomas DeLauer Channel Here: 1 Calories In vs. Calories Out – The Debate is Over

That SHREDDED Life Ep. 16 | I Can’t Believe She Did It | The BEST My Squats Have Looked

Get Mentally Prepared for the New Year with these 4 Tricks

The Benefits of Zinc for a Deeper Sleep

Diagnosing Your StoolThe Nutritional Cause of Chapped Lips Scroll to top