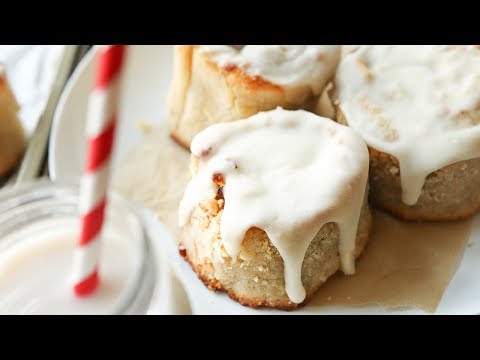 One of the BEST Keto Recipes you’ll ever make! These low carb Cinnamon Rolls are a keto diet breakfast game changer. Not only are they delicious, but they’re SO EASY to make, and great for beginners to make on the keto diet. I modified the FatHead dough recipe by adding a bit of coconut flour and powdered erythritol, and these delicious keto cinnamon rolls were the result! I hope you enjoy them as much as I have.

In a large bowl add and whisk 1 large egg

Mix everything until a stick dough forms. Once it does, add the coconut flour, and mix until a workable ball of dough forms

When it does add the ball of dough to a piece of parchment paper coated with almond flour.

Press out the dough into an oval/rectangle. Make sure to use your hands, and not a rolling pin, because the dough may stick to the pin.

Once the dough is about 1/4 inch thick and about 16 inches long coat it with the melted butter and add the granulated erythritol and cinnamon.

Roll the cinnamon roll up – follow the instructions in the video.

Cut the cinnamon rolls into 5 equal sized pieces, and add them to a baking sheet lined with parchment paper (coating the parchment paper in baking spray will make them easier to remove).

Bake at 350 Degrees for about 15 minutes, or until the tops are golden brown.

*NOTE: They may feel “cakey” when you take them out, but once they cool down they’ll firm up.

While the cinnamon rolls are cooling make the icing. Add the confectioners erythritol and the almond milk to a dish and mix.

Coat the cinnamon rolls in icing, and enjoy!

Meal By Meal Full Day Of Eating While Cutting & Dieting | What I Eat In A Day To Lose Weight Ep. 24

The Myth about GERD and Acid Reflux Relief -MUST WATCH!

High Fat Diets Are Only Dangerous if…

The Most Important Nutrient for Infants

Raynaud’s Syndrome: Do This…

What to Eat on OMAD Fasting (with Carbs)

What is the Fasting Mimicking Diet (FMD)? Scroll to top