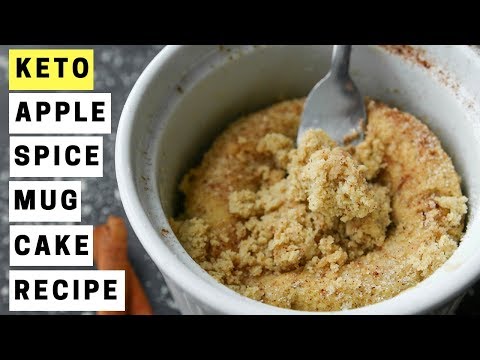 Easy KETO Recipes don’t get better than this! Today’s Low Carb Coffee Mug Cake Recipe can be a great keto breakfast recipe, keto dessert, or just a keto snack idea! This keto cake is made in the microwave with coconut flour & almond flour! And as far as Keto cake recipes go it tastes like it should have WAY MORE carbs than it does, AND like it should take WAY MORE time than just 2 minutes. Seriously, this is one of the best easy keto recipes for beginners, because keto recipes just don’t get simpler than this!

Add all the liquid ingredients to a medium sized bowl, and whisk until combined
Add the dry ingredients into the bowl, and whisk until combined again
When everything has dissolved/combined, coat a ramekin/mug/small dish with non-stick baking spray, and add the batter
Microwave for 1-2 1/2 minutes
***Microwave times will vary. ALWAYS go with less time than you think. Then keep microwaving until perfect cake consistency forms.
***My microwave is 700 Watts and 2:30 is about the right amount of time. Adjust accordingly
While the cake is microwaving add the topping ingredients to a small dish, and combine
When the cake is done in the microwave add the topping, and enjoy!

Frustrated Going to the Doctor?

Why Do I Get Exhausted After Giving Up On Carbs? – Dr.Berg Scroll to top